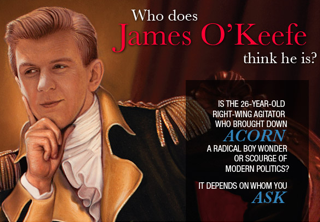 Struggling to explain him, Lieberman– who received access through O’Keefe after convincing him to trust the columnist because they “inhabit the same circles”– alludes to everyone from Johnny Knoxville to Woodward and Bernstein to G. Gordon Liddy himself: an “ace performance ­artist–political shit stirrer–jackass.” This convoluted description, while accurate, doesn’t explain too much, though the background that Lieberman gives on his life certainly adds some clarity. O’Keefe has been at this since performing in high school musicals. That preposterous “pimp” coat he wore in the famous ACORN video? On loan from grandma. Yes, he lives in his parents’ house, but he’d rather not talk about it. He is very poor and appears to trust people he barely knows on a whim. He has a cache of juicy “investigative” pieces he can’t release because of the legally questionable way the information was obtained, one– Lieberman’s favorite– in which O’Keefe plays a “high-roller” who visits a resort owned by a prominent politician in search of prostitutes. Always the prostitutes with this one.

That latter point made and broke his career– the acclaimed ACORN sting was not his idea, but that of 20-year-old Hannah Giles, the “prostitute” in the video turned fellow conservative wunderkind. Giles found O’Keefe on Facebook, pitched the idea, and it was a go. “We met in person the day before we went undercover,” Giles confesses in the piece. Conversely, the CNN dildo boat was the idea of one Ben Wetmore, a  law school friend who first helped fund his Rutgers conservative pamphlet, The Centurion. Their relationship Lieberman, through sources, identifies as “master-puppet,” and one gets the idea that it is Wetmore who has led O’Keefe astray. “Yet in the space of two years,” Lieberman writes, “his supporters have splintered into true believers (i.e., Wetmore) and the rest of us (i.e., Blackwell, Breitbart and I).” Yes, Lieberman puts Andrew Breitbart, one of O’Keefe’s most vocal supporters, in the skeptic column, likely due to his scolding post-CNN debacle and the fact that O’Keefe’s latest, against NPR, debuted on Tucker Carlson‘s Daily Caller. Meanwhile, Wetmore tells Lieberman, “I don’t think he’s risky enough.” There the line is drawn.

If O’Keefe were my client, I would hand him a flowchart of the positive people and the parasites in his life. Then I would take away his internet connection until he could come up with a long-term plan. And I don’t mean a new hit list of liberal targets to lampoon. He needs to figure out how to leverage what he’s accomplished into a paying gig that doesn’t rely on the generosity of anonymous wealthy donors with an ax to grind. He can’t run his movement from his parents’ house forever.

In some ways, Playboy is the perfect medium in which O’Keefe can let his hair down, with just the right amount of frivolity to undermine the seriousness of some of the graver accusations against him. But it also perpetuates the thoroughly unlikeable image of O’Keefe as a scrawny conservative wannabe ladies’ man that won him so many enemies the first time around, particularly when coupled with his alliance with someone like Wetmore. One gets the feeling, however, that this is precisely what O’Keefe is after.

Perhaps he is pursuing the high of getting as close to universal dismissal from the public discourse as possible without actually losing influence– the old Werner Herzog adage that there is nothing more exhilarating than being shot at and missed. The article makes a point of highlighting how little O’Keefe cares for money, and it becomes impossible to see what he seeks to gain from his performance art projects if not ignominy. While Lieberman argues that O’Keefe “possesses awful judgment,” his attempts at muckraking seem far too deliberate for O’Keefe not to intend this seemingly endless flirtation with disgrace that handicaps him before many on the right who would otherwise support his efforts.