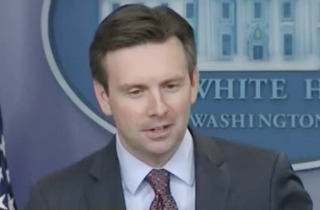 White House press secretary Josh Earnest wrote a letter to the editors of The New York Times Wednesday to defend the Obama administration’s record on transparency, still agreeing with President Barack Obama‘s famous pronouncement that his was “the most transparent administration” in history.

Earnest took exception to a piece from Times media critic Jim Rutenberg that took a shot at the administration. “Right now, every signal from Mrs. Clinton is that should she win, her administration would continue the tradition of being still more secretive than the one before it,” Rutenberg wrote. “The Obama White House has achieved just that with its abysmal record on fulfilling Freedom of Information Act requests and its record of prosecuting whistle-blowers who have shared national security information with the press.”

Naturally, Earnest disagreed with that assessment. Rutenberg, he argued, “did not acknowledge the important and unprecedented steps that the Obama administration has taken to fulfill the president’s promise to lead the most transparent White House in history.”

“These accomplishments include, but are not limited to, routinely and proactively releasing the name, date and time of nearly every White House visitor,” he wrote. “Some will recall that the previous administration went to the Supreme Court to try to prevent the release of these records.”

“If journalists don’t acknowledge steps that the Obama administration has taken to strengthen transparency, then who will?” asked Earnest. “…If President Obama’s government transparency effort is not even noted by The Times’s media columnist, then why would future presidential candidates make it a priority?”