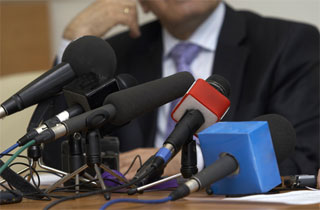 During a journalism conference held in Chicago this week, the AP’s Washington bureau chief, Sally Buzbee, worried that the Obama Administration had done more to reduce transparency and muzzle the media in recent history — even more than the Bush administration.

She went into a list of specific accusations, such as an AP transportation reporter revealing that her sources were threatened with termination if they were caught speaking to her, or the fact that the Administration won’t allow journalists to be embedded with Americans aiding in the fight against ISIS. Notably, she revealed that the Administration has increased their intervention into state and local journalism inquiries: ” In some cases, federal officials have formally intervened in state open records cases, arguing for secrecy.”

James Risen, a New York Times journalist facing jail time for refusing to testify at the trial of an alleged CIA source, illustrated the point in an anecdote:

He spoke of scaring one source just by going to his home and knocking on the front door.

“He opened the door and he turned white,” Risen said. “He marches me back through the kitchen (to a back exit) and said, “‘Go out that way.'”

Risen added that the government appeared to be taking advantage of how the media industry is off balance amid the growing influence of online news sources and financial hardships. He asked if the government would have taken such a hard line when traditional media were on firmer footing decades ago.

“I kind of think the answer is no,” he said. Media shouldn’t shrink before the challenge, Risen said, adding, “The only response … is to do even more aggressive investigative reporting.”

In a statement to the AP, White House press secretary Josh Earnest touted the Administration’s “great efforts to make government more transparent and more accessible than ever.”