Judith Miller: “I Value My Political Independence. So Do Fox And Newsmax.” 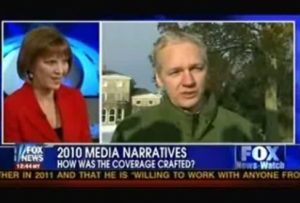 Ex-New York Times reporter Judith Miller has come out swinging at critics who jumped on her for comments made over the weekend calling WikiLeaks founder Julian Assange a “bad journalist.”

Miller, who many consider a bad journalist herself for her Times reporting that helped build the case for war in Iraq, told Yahoo’s The Cutline that there’s simply no comparison between the work she did for the Times and what Assange has done with WikiLeaks:

“If anybody bothered to read the Iraq war stories they’re now so busy criticizing, they would see that Julian Assange and I were involved in very different kinds of journalism. They are not morally equivalent. While we both sought to publicize official secrets, I and my co-authors at The NYT spent enormous time trying to verify the secret government reports and other WMD-related stories we published…Julian Assange, whom I have repeatedly defended, did none of these things. He engaged in data dumping and left these vital journalistic tasks to the papers that used his information.”

As Cutline’s Michael Calderone points out, Miller’s comments about Assange have been too tempting for bloggers to resist, with political blog Wonkette putting the story this way: “Lying Warmonger Judith Miller Blasts Assange For Not Verifying Info.”

I’ve even written for the Independent, in London,” Miller continued. “I value my political independence. So do Fox and Newsmax.