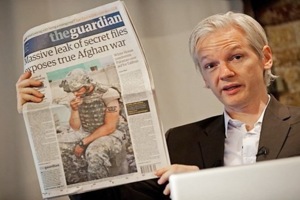 Say what you will about Wikileaks supreme hero/villain Julian Assange, he has crafted quite the reputation as one of the most difficult men to work with in the world, despite fronting an organization that relies upon collaboration with the media. Vanity Fair‘s latest extensive feature goes behind the scenes into how at least one newspaper, The Guardian, kept Assange at the table. Hint: it involved “a great deal of coffee followed by a great deal of wine.”

Depicting Wikileaks and The Guardian as the “matter and anti-matter” of all journalism, author Sarah Ellison digs through a herculean amount of sources to find the true dynamics behind the centuries-old paper and the 4-year-old revolutionary website, and what she finds is not pretty. Her profile is riddled with what have become typical horror stories of Assange’s behavior and personality– that he was excessively controlling of his documents and volunteers and his hunger for transparency often clouded good judgment on what to release. Much of it we have heard before, from both Assange himself and those close to him, like Wikileaks Disgruntled Employee of the Month (and OpenLeaks founder) Daniel Dormscheit-Berg, but while the tensions at the non-place that is Wikileaks HQ have surfaced before, the strife between Wikileaks and its collaborators has been held mostly behind the curtain.

By far the most colorful story in Ellison’s feature is the time Assange threatened to sue The Guardian over Wikileaks documents that escaped his control. Assange snapped at the paper when, having received one of the large packages of secrets released late last year from another Wikileaks source, The Guardian set up to publish it, without Assange’s permission and at a deadline Assange disapproved of. In response, Assange stormed the office of Guardian head Alan Rusbridger, “pallid and sweaty, his thin frame racked by a cough that had been plaguing him for weeks,” and threatened to sue. Patching up this wound, Ellison explains vividly, was “a process involving a great deal of coffee followed by a great deal of wine.”

The struggle didn’t begin or end with that anecdote, but that certainly seemed to be its climax. Ellison understands the struggle partially as the side effects of opposites attracting, and partially as a result of neither team Wikileaks nor team Guardian fully understanding each other:

“One of the oldest newspapers in the world, with strict and established journalistic standards, joined up with one of the newest in a breed of online muckrakers, with no standards at all except fealty to an ideal of “transparency”—that is, dumping raw material into the public square for people to pick over as they will. It is very likely that neither Alan Rusbridger nor Julian Assange fully understood the nature of the other’s organization when they joined forces.”

As a result, the newspaper tried to handle Assange with “kid gloves,” she explained, while doing a balancing act on its own expenses. That the financial situation for Wikileaks was dire is a pretty well-known fact; half of the website is ads begging for donations. But Ellison highlights the economic dilemma over at The Guardian as well– despite having a unique funding system that keeps it higher afloat than most newspapers its size, it has to contend similarly with the end of print journalism, and the fact that, despite their impressive web traffic, they have been unable to successfully translate this into a viable financial solution for the future.

Even more shocking than the lack of money on the part of the newspaper, however, is one line of the piece that suggests Assange’s ammunition has run out. “He is short of money and short of secrets… the whole thing has collapsed,” an anonymous source discloses in the piece. That he is without money or viable support will not keep Assange from being dangerous, but without his armor of government secrets, he would be at the end of his rope. Of course, Assange and Wikileaks still claim a package “that could take down a bank or two,” speculated to be about Bank of America or a similarly massive American enterprise, which would contradict the claim that there are no more secrets. After this package, however, and given the mainstream media’s highlighting of alleged leaker Pvt. Bradley Manning‘s solitary confinement, it’s difficult to see where more secrets would come from or who would send them to Assange. And for Assange, being a man without secrets would make him a man without recourse.