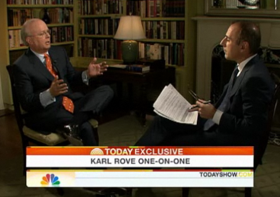 In anticipation of the release of his memoir, Courage and Consequence, Karl Rove opened up about his political and personal life to Matt Lauer this morning on the Today show, where the host probed into Rove’s understanding of “Rovian” politics, his role in the more negative aspects of both George W. Bush presidential campaigns and the upbringing that primed him for his place in history as one of the most influential, if not most beloved, political figures of the 21st century. More shocking than Rove’s willingness to open up to Lauer – who, despite not exactly being a hard-hitting interviewer, is no Oprah either – was his comparative ease in discussing his private life compared to answering political questions. It was clear that, despite the traumatic nature of Lauer’s questions in the second half of the interview, Rove was more comfortable talking about his life than the 2000 Bush campaign.

The first segment of the interview exposed a defensive Rove, one who had studied all the answers and appeared not entirely convinced that what he was saying was believable. When prompted to discuss his view of “Rovian” politics – a style Lauer described as dirty, ruthless and highly effective – Rove’s reply was that suggesting negative campaigning is effective was “a pretty nasty view of the American public,” one that he “has more respect for…than that.”

As for the rumor that John McCain had fathered an illegitimate black child, one commonly attributed to Rove, he suggested it came from an email by a Bob Jones University professor that spread further than was intended. When asked to explain why, then, he became the clear suspect in spreading the rumor, he played the victim: “Why not pick out the sort of dough-face, balding guy… and blame him?”

The Karl Rove in the personal segment of the interview appeared much more approachable and relaxed than the tense, battle-ready one that met Lauer to discuss his legacy. Rove’s demeanor harkened back to Richard Nixon‘s during the first few hours of his interview with David Frost in the early 1970s: he was a wrongly-maligned patriot and family man who had experienced a great deal of suffering to become who he now was. He described himself as “Nerdville, complete,” his family as adoring and kind despite never telling him he was adopted (his aunt “let fly” the fact over dinner once when he was 19), and his parents as people who had suffered more than their share and withstood as long as they could.

Emphasizing that his situation was not unique, he said of his mother’s suicide: “Life is rough for everybody, and to have five children who love her, and to have grandchildren, and yet to feel that there is so little in your life that you’re going to end it has got to be just horrible.”

As for the rumors that his father was gay, he said, “I don’t know whether my father was, at the end of his life, gay or not. I just don’t. I don’t think so, but I don’t know.”

Today will host Karl tomorrow on their program live, and the venue may help him mold himself into a sympathetic character more than the taped interview, where he is constrained by scripted questions and edits that make him come off as more contrived than he may want. Plus, in his more current role as cable news talking head, Rove has clocked in much more experience on live camera than in a controlled setting. Today has not released what topics Rove will discuss tomorrow morning, however.