Keith Olbermann Introduces His Audience To Beck-Favorite “The Overton Window” 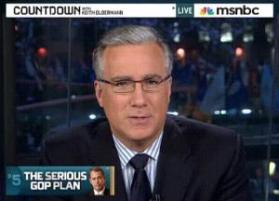 Sometimes when you cover the media long enough, things happen that are so surprisingly weird it borders on the unexplainable.

So with this in mind – remember Glenn Beck‘s New York Times bestseller The Overton Window? Well last night Keith Olbermann introduced his audience to an interesting concept at the beginning of his show. It’s called “The Overton Window.”

Yeah Beck initially explained “The Overton Window” concept back in February, with the help of a chalkboard of course. Then, the book came out (we might have covered it in a few different ways here at Mediaite) and the fiction thriller topped (surprise, surprise) the NYT Bestseller’s list.

Which brings us to MSNBC at 8:01pmET last night, when Keith Olbermann began his show with this:

Good evening, from New York. “The Overton Window” is the term that describes the ideas you can pitch in public without being considered nuts. Propose something outside the window, and you generally get tossed through the window. for the last however many years the Republicans mastered the art of dragging the Overton Window so far to the right, it’s not even on the house anymore. With complicity from both Democrats and the media, that’s how America, America actually found itself debating whether America, America, should torture people. And now in our fifth story tonight, the man who wants to be Speaker of the House did it again today.

Then, a segment about Rep. Boehner. What’s clear here is that Beck and Olbermann agree on something: what “The Overton Window” is in theory (but certainly not in practice).

But what a strange full-circle for the political concept. If Beck begins his show tonight and there are “pitchforks and torches” on his chalkboard, we’ll know we’re officially in The Twilight Zone.