Keith Olbermann Tells NYT In Pre-Suspension Interview: ‘I Don’t Have A Good Working Definition Of Smug’ 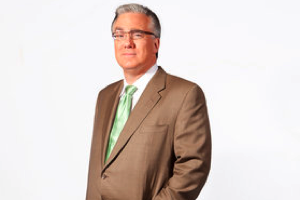 Back when he was a senator, Vice President-to-be Joe Biden was having a hard time keeping his temper in check and found his indignation a hurdle rather than an asset to his career. Seeking someone of like mind and ideology for guidance, he asked Keith Olbermann out to lunch, to get tips on how to properly channel liberal anger. This according to the New York Times, whose pre-suspension interview with Olbermann was published today.

The anecdote came in response to a question about anger on the left, and how outrage had been, for a time before Olbermann, exclusive to major right-wing figures. “He said,” Olbermann recounts, “‘I just come across like I’m angry and out of control, and you seem to focus it and make it look useful and expressive.’” He tried to help, being a “happy amateur” on the subject, but declined to say that he himself had anger management issues. As for being “smug,” he answered that he didn’t quite know how to refute the claim, as “I don’t have a good working definition of smug.”

Aside from these ruminations, most of the interview took Olbermann back to his disagreements with Jon Stewart and his opinion of the Rally to Restore Sanity. Watching at home, he found it “odd” that images of himself were inserted in between tirades by Fox News commentators, asking himself, “Why is my videotape there?… When I yell there is a reason for it.” He describes the current political landscape as a “war” and argues any alternative definition is naive. And, personally, he takes some issue with the way Stewart portrays himself:

“I said he jumped a small shark. If he believes he has no political viewpoint, that’s ludicrous. For him to now say, ‘‘I’m not in the media, I’m not poised in this world of political expression, I never take gratuitous shots at people or go over the top and I’m not particularly pointed in one direction,’’ each of those things was ludicrous.”

Olbermann also clarified that he had never been a guest on the Daily Show, having been invited in the early days of Countdown but never any time after (“and I’m not sure why”). It does appear that his relationship with the show is not contentious, however, as he has done cameo appearances, like the journalist Chatroulette parody a few months back.

The full New York Times interview also takes Olbermann through some sensitive questions about his family and thoughts from his new book, Pitchforks and Torches.