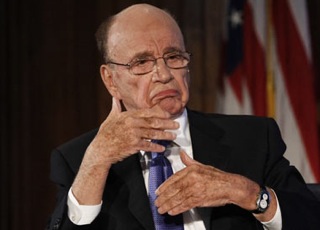 Rupert Murdoch doesn’t have many friends left. After, in his words, the most humble day of his life, the testimony he gave before Parliament about the scandal that brought down News of the World seems to have done little to ingratiate him with an outraged public. The backlash has tempted many to go after all of News Corp and the press in general, with the rage perhaps most succinctly captured by this outrageous title in the L.A. Times today: “Tabloids Don’t Deserve the First Amendment.”

The piece was written by Jeffrey Scott Shapiro, a tabloider-turned-media-prosecutor frustrated with how difficult it is to deliver justice to those in his former trade. He begins with a fairly strong argument for why tabloid journalism is insidious, arguing that those journalists “have justified their tactics by deluding themselves that they are avengers for the working class, exposing the decadence of the rich and famous as well as the royal family.”

He presents evidence against News Corporation and the Murdoch empire that few would refute is reprehensible– but then expands the scope of his argument to dizzying levels. “The problem isn’t Rupert Murdoch,” he argues. “The problem is that the culture of tabloid journalism in both Britain and the United States is deeply tied to criminal acts.” He goes on to explain that “without illegal conduct, tabloids could not preempt the mainstream press.”

That is about as far as Shapiro argues, however, without tying his claims directly to his personal experiences. He explains that he left the tabloid world after blowing the whistle on his editors for “the attempted extortion of a police detective”– threatening to write something negative about the officer if they did not leak certain evidence. This behavior, he argues, is pervasive in tabloid culture, but his enlightenment came when he attempted to prosecute it, and found that extortion being illegal isn’t enough to get tabloids in trouble for committing the crimes. He quotes an FBI official who says, “Every time we get reports of misconduct by the press, we try to do something, but the U.S. attorney’s office shuts us down because of the 1st Amendment.”

Shapiro concludes that “the judicial system is too quick to bow before the 1st Amendment,” which allows criminals to use it as a shield if they are also “journalists.” Many of his points are well-taken: extortion is a crime and should be punished accordingly, no matter who is responsible for it. As extortion, bribery, hacking, and the many alleged crimes of tabloids have nothing to do with writing whatever one feels like writing, being a journalist shouldn’t put anyone above the law. Where Shapiro fails is in blaming the problem on the First Amendment.

The First Amendment is very short. It reads: “Congress shall make no law respecting an establishment of religion, or prohibiting the free exercise thereof; or abridging the freedom of speech, or of the press; or the right of the people peaceably to assemble, and to petition the Government for a redress of grievances.” The relevant bit there, of course, is the abridgment of the freedom of press, directly correlated to that of speech. This is why defamation, libel and slander, are civil infractions, but can never be prosecuted criminally. Supreme Court precedent staunchly defends the right of publications to say whatever the wish, and these precedents do cause hesitation in judges when passing down sentences. In suggesting that this tradition– the tradition of Hustler v. Falwell that permits writers to say what they wish– is somehow flawed is to misunderstand the fundamental principles upon which this nation was founded.

Shapiro leaves out a very important point in arguing against the First Amendment: the crimes for which News of the World is currently under investigation have nothing to do with expression. Extorting a police officer has nothing to do with speech. Hacking the phones of terror victims has nothing to do with speech. As it turns out, the Constitution also has a near-universally recognized right to privacy in it, as well– one that bars the government from American bedrooms and medical files, and one that gives life to violations elsewhere by private entities to individual privacy.

The theory of the Constitution is not wrong. It is the practice, the implementation of punishment against the violation of the Constitutional right to privacy, that needs reform, and to suggest that law and not man is at fault in this case could ignite a troubling movement to silence expression that has nothing to do with crime.