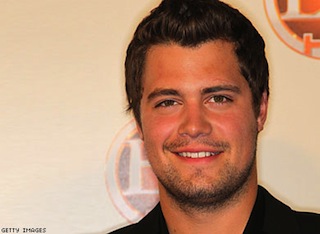 How much “all” is there really left to “tell?” There have been so many books about the Sarah Palin’s time in the 2008 election and the Palin family as a whole that I think I could recall from memory the amount of tiles on their bathroom floor at this point. Seriously, whoever teaches English over in Wasilla needs to pat themselves on the back. That town spits out more writers than a Shakespeare factory. However, if there’s any point of view left that might still be interesting at this point, it’s this one; Levi Johnston’s.

Yes, Levi Johnston is writing a book and it has the absolutely amazing title, “Deer in the Headlights: My Life in Sarah Palin’s Crosshairs.” While this creates a slightly confusing combination of metaphors (is deer-Levi getting shot or run over?), it also brings to mind the absolutely hilarious image of Sarah Palin commandeering John McCain’s Straight Talk Express and using it to flatten helpless animals while Johnston (wearing antlers) can only watch from the tracks ahead. At least it does for me.

“‘Deer in the Headlights: My Life in Sarah Palin’s Crosshairs,’ is being billed as a coming-of-age story and is due out in the fall.

‘I want to tell the truth about my close relationship with the Palins, my sense of Sarah and my perplexing fall from grace — how I feel and what I’ve learned,’ Johnston said in a statement released by his publisher, Touchstone Publishing.

‘Levi is going to talk about everybody, including Sarah Palin, and the rest of the family — Bristol too,’ Johnston’s manager, Tank Johnson, told RadarOnline. ‘The book will have good stuff. He isn’t leaving anything out.'”

“Perplexing fall from grace?” That would imply that grace can only be obtained by playing hockey, going camping, hanging out with the boys, doing some fishing, shooting some sh*t and just f**kin’ chillin’ which…I really can’t argue with.

That brilliant words, of course, come from Johnston’s MySpace page which was scrubbed clean by the McCain team shortly after it was revealed that he was the father of a potential Vice-Presidential grandson. I remember reading that page and thinking, back in 2008, that Levi Johnston might have the greatest political story in our modern times. Just think about it. Some poor, everyday dope, a proud “f**cking redneck,” gets suddenly forced into a national election all because he forgot to wear a condom one time. The possibilities for poignant human comedy are absolutely endless. I’m being completely serious.

However, I’ve always thought the story would work best as a loosely fictionalized version à la Primary Colors, and I certainly never imagined it being written by the young man himself. Who knows, though. Maybe Johnston (or, ahem, his ghost writer) will surprise us. It definitely is a good story.