After “Amicable” $8 Million Split With CNN, What’s Next For Lou Dobbs?

After “Amicable” $8 Million Split With CNN, What’s Next For Lou Dobbs? 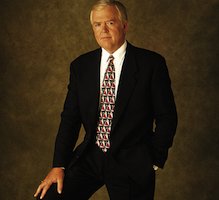 Almost a week after the fact, lots of fascinating details are starting to trickle in about Lou Dobbs‘ departure from CNN. Why did he announce his resignation on Wednesday instead of the more customary Friday? Bad luck to bow on Friday the 13th. What sort of severance did he get? For the headline-impaired among you, that would be $8 million.

The big question: is Dobbs planning on going into politics?

In his second interview since leaving elected office CNN (the first was with the Atlanta Journal-Constitution, which was a good read but largely skirted the issue of politics), Dobbs tells the AP that his split with the network was “amicable,” and is uncoy about his interest in going into politics now that his obligations to the network have ceased: “A run for public office interests him, Dobbs said. It’s one of several options he said he’s considering.”

The New York Post, never the paper to let amicability go unquestioned, claims to have found its price tag: $8 million, despite the fact that Dobbs had a year-and-a-half to go before his contract was fulfilled. Or as they put it: “CNN was so sick of Lou Dobbs, it gave him an $8 million severance package to leave.” Speaking to “TV insiders” and “one colleague,” the Post claims that both a move to Fox and a move into politics are “highly unlikely” for Dobbs.

Dobbs is appearing on The O’Reilly Factor tonight, which might help put some of the speculations to rest. If not, he’ll be appearing on The Daily Show on Wednesday — and as we all know, that’s where the big news tends to get broken first.