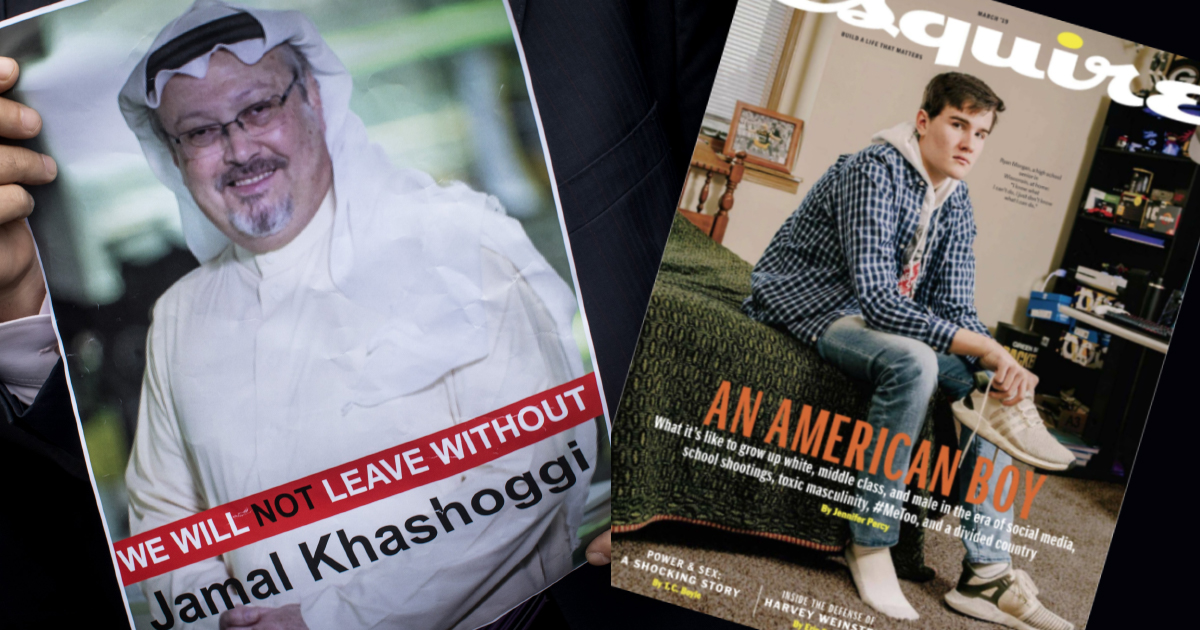 Harper’s Magazine Vice President of Marketing and Communications Giulia Melucci is getting blasted on Twitter for comparing outrage over Esquire‘s March cover with the murder and dismemberment of journalist Jamal Khashoggi.

Esquire has been heavily criticized and memed for a cover story featuring the plight of a young, white, “American Boy” for it’s March issue, but which was released in the middle of Black History Month.

But on Tuesday evening, Melucci — whose Twitter account is not verified, but has been active since 2009 — leapt to defend the magazine in the most absurdly macabre of terms:

As you lift your pitchfork (or bone saw) over any journalist or publication you disagree with, you are playing right into Trump’s agenda. If that’s your goal, keep up your battle against @esquire and Jen Percy, finish the job on our already beleaguered press!

Remarkably, Melucci not only didn’t back down in the face of intense criticism, she spent the next twenty hours or so digging in:

Attacks on the press are all the same, whether they’re done with Twitter vitriol or a bone saw. The goal is silence, the weapon is fear. Your attacks are not considered, you don’t even read the stuff you’re condemning.

I am so deeply, deeply ashamed. If you only knew.

Defending a position, rather than just emoting. Yes, that is unusual to find in this space. https://t.co/h1JizxTNTD

You’re not looking at the big picture. It’s not one article, it’s the thoughtless culture of vitriol on Twitter that seeks to silence whatever it finds disagreeable. This comes from both the right and the left. What is the end game here? https://t.co/EDnUjMsiQG

Twitter mobs and Saudis with bone saws have the same goal: to silence what they find disagreeable.

That doesn’t even make any sense. Obviously I’m not comparing the murder to the article I’m comparing a fatal attack on a journalist to all attacks on journalists and journalism. Yes, murder is much worse than some harsh words on Twitter but they all have the same goal, silence.

As I’m sure somebody on Twitter pointed out somewhere, the goal of bonesaw-wielding murderers is murder, whereas generally speaking, the goal of criticism is to encourage the criticizee to do better.

As of this writing, Melucci is still at it, but Karen Attiah, Khashoggi’s Washington Post editor, appears to have had the last word:

Twitter mobs and Saudis with bone saws have the same goal: to silence what they find disagreeable.

Judging by her decision to not only double down but to insult/patronize people who are responding to her, Id imagine the one thing she does want is rile up a pile on to prove her initial bad point.

Let’s take our screen shots, and give her the non-attention she deserves.

You’ve proven not to be worthy of engaging with in good faith on any of these issue. Godspeed with whatever Ill-fated attention quest you’re on.

Perhaps the intactness of Melucci’s bones following this barrage of criticism will serve as its own lesson.