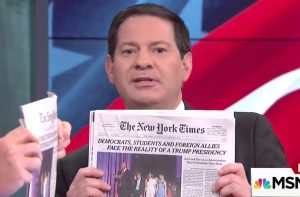 Bloomberg’s Mark Halperin singled out The New York Times in particular for it’s biased coverage of Donald Trump‘s presidential victory Thursday, saying that its post-election headline could have come straight from the satirical newspaper The Onion.

“I love The New York Times. I think it’s a great institution…” Halperin said on MSNBC’s Morning Joe, holding up a copy of the print version. “Look at the headline of this story.”

The front page headline of The Times read “Democrats, Students And Foreign Allies Face The Reality Of A Trump Presidency.” “This is the day after a surprising underdog sweeping victory,” Halperin pointed out.

“Their headline is not ‘Disaffected Americans Have A Champion Going To The White House’ or ‘The Country Votes For Fundamental Change.’ The headline is about how disappointed the friends of the people who run The New York Times are about what happened,” he said.

“This is staggering,” host Joe Scarborough agreed, brandishing his own copy. “Mark, I’m glad you brought this up.”

“If a Democratic candidate who was given a 10% chance of winning by The New York Times had ended up winning– and winning red states as Trump won blue states– I don’t think that would have been the headline,” he concluded. “I’ll just say again; the responsibility of journalists is to not report on their biases, it’s to go out and understand the country through the prism of the election and say why are people feeling the way they’re feeling.”