Maureen Dowd: Robert Gibbs Was Right About The ‘Professional Left’

Maureen Dowd: Robert Gibbs Was Right About The ‘Professional Left’ 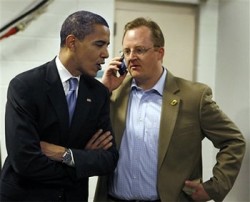 Maureen Dowd thinks President Obama should fire Press Secretary Robert Gibbs. Fear not Gibbs fans, she merely thinks the President should promote Gibbs to adviser because he is a truth teller (be it of the unpredictable sort). Something Gibbs might not be all that opposed to if this WaPo profile from April is to be believed.

Dowd, in one of her smarter columns of late, thinks Gibbs is correct in his assertion that the “professional left” is undermining the Obama administration and that “the press secretary and the president are understandably frustrated over the asymmetry at the heart of American politics.”

Rand Paul and Sharron Angle aside, Republicans often find a way to exploit their extremes for political advantage, while Democratic extremes typically do damage to a Democratic president.

One of the most disgusting things about Mitch McConnell and Jon Kyl, and now the former maverick John McCain, is that they are happy to be co-opted by the radicals in their party to form one movement against President Obama.

On the Republican side, the crazies often end up helping the Republican leadership. On the Democratic side, the radicals are constantly sniping at Obama, expressing their feelings of betrayal.

Fox built up a Republican president; MSNBC is trying to make its reputation by tearing down a Democratic one.

In the larger sense what she appears to point out is that Fox and the GOP have merely figured out how to sell more tickets than MSNBC and the always less cohesive Dems and as the left scrambles to keep up (and keep up the ratings) Obama is suffering the consequences. Dowd further concludes that perhaps Gibbs, in the end, is not the best man for the job:

Gibbs does not see his job as a bridge between the press and the presidency. He sees himself more as a moat. He has always wanted to be an inside counselor to the president. So Obama — who bonded with Gibbs during the campaign, over sports, missing their families and how irritating the blog-around-the-clock press corps is — would be wise to promote him to a counselor. Let someone who shows less disdain for the press work with the press, and be the more engaging face of the White House.

Needless to say, the Mid-terms are fast approaching and are traditionally a time in which administrations make changes.