Meghan McCain To Bill O’Reilly: GOP Can Rebrand Themselves As ‘Small Govt. Being Sexy’ 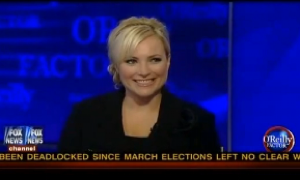 Meghan McCain is making the rounds this week talking about her new book Dirty Sexy Politics, so naturally she chose to make an appearance on The O’Reilly Factor, to talk dirty, talk sexy and talk politics (though not in that order).

At first, Bill O’Reilly wanted to talk to her about statements she’d made about Sarah Palin on Good Morning America that morning.  McCain took the opportunity to explain that the “beef” (as O’Reilly put it) she has with Sarah Palin is only a political one — McCain defines herself as a “socially-liberal Republican” where Palin has more traditionally-Republican stances.  Ultimately, though, she uses the opportunity to try to build bridges and says there’s room in the party for everyone.

After announcing her opinions on the how President Obama is doing (not great), McCain had earned her book plug and it was time to talk about Dirty Sexy Money.  The rest of the interview gradually went from coy to, well…kinda gross, as the topics jumped around from government being sexy to Henry Kissinger‘s sex life.  It was a lot of sexiness being thrown around, for, frankly, very un-sexy topics:

McCain: “The sexy part, as Dr. Kissinger says, is that power is the ultimate aphrodisiac.”

O’Reilly: “I heard he was quite the ladies man…”

Henry Kissinger’s seduction style is one thing I didn’t want to have to think about, but there it is. In response, Meghan McCain tried to bring it back to her book, explaining her hope of sexying-up the Republican party:

“The political process is sexy. I think democracy is sexy.  And Republicans can start rebranding themselves as small government being sexy…”

Let’s break this down.  1) The first claim might be true — the political process can be sexy, in an intriguing/power-hungry kind of way.  2) But when Meghan claims that democracy is sexy, we start to get off the rails.  Standing in line and voting isn’t sexy, referenda aren’t sexy, censuses aren’t sexy — really there’s nothing sexy about any of it.  3) And finally, her last claim could be considered sexy, if it didn’t have the unsexiest word in the world in it: government.

Meghan McCain has been trying to inject sex into the GOP dialogue for some time now.  She’s modeled for the NOH8 campaign, been a vocal proponent of gay marriage, and just last year found herself in an online dialogue about what was and wasn’t inappropriate after she tweeted a cleavage-heavy photo of herself.

McCain is a fresh and candid new voice for the GOP, and I suppose if anyone’s going to try to sexy-up the GOP, it should be her.  Because if it’s not her, it could be Henry Kissinger — and no one wants to see his TwitPics.

Check out Meghan McCain’s interview on The O’Reilly Factor: