Megyn Kelly: Is Newsweek Obligated To Put An ‘Actual Journalist’ On Its Cover Instead Of Andrew Sullivan (UPDATE)
video

Megyn Kelly: Is Newsweek Obligated To Put An ‘Actual Journalist’ On Its Cover Instead Of Andrew Sullivan (UPDATE) 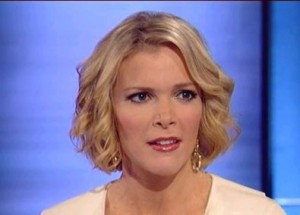 Newsweek (and Tina Brown)’s decision to put Andrew Sullivan’s provocative essay (and an even more provocative headline) on the cover was purely about getting people to talk about Newsweek. That was the theory put forth by a Fox News panel during a segment dedicated to…talking about Newsweek. But, as Megyn Kelly proposed at the start, has Newsweek and the mainstream media “crossed a line in trying to get the President reelected?”

Of course, as this was a segment in which a cable news program discusses a news competitor, the customary discrediting had to be done before the conversation could get started in earnest. Ok, lets see. Kelly joked that only four people read Newsweek and then asked if the magazine had “some obligation to pu an actual journalist” on its cover. Ooh, burn, Andrew! Who’s dumb now?!

Ok, where were we?

Kelly then asked if Newsweek was obligated to tell readers that Sullivan was a former TrigTruther. Radio host Leslie Marshall pointed out that the audience has the ability to Google the columnist, but Kelly argued that most people think of Newsweek as straight reporting. The National Review‘s Rich Lowry claimed that the magazine hasn’t been for a long time and is now “the house organ of the Obama Administration.”

Kelly worried that older people like her mom and step dad wouldn’t know that. Well, lets hope they were watching the show today. No one could come out of this segment without realizing just how purely evil Newsweek truly is.

Of course, news outlets dissing other news outlets makes up for about 95% of the daily cable news output, so this segment wasn’t anything new. The most fun moment came right at the top as we got to watch Kelly continue to trash her show’s new music choices.

I don’t know what it is but, whether you’re writing for a magazine or anchoring a newscast, I’ve always found self deprecation more charming than full on attacks.

UPDATE: Andrew Sullivan has responded to the Fox News segment. In a blog post entitled “How Scared is Fox?”, Sullivan challenges the cable network to have him on to defend his piece.

“What I want to know is why they cannot invite the author of an essay to debate it, rather than two random individuals (including Rich “Starbursts” Lowry) to discuss. Surely that’s only fair – unless, of course, I am on a blacklist.

So this is an open challenge to Fox News. If you want to trash my work, have me on to defend it. Any time, Megyn. Any time. What are you afraid of?

Apart from the truth, that is. ”