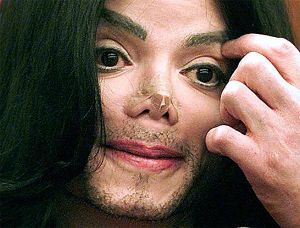 With the three network news shows leading with Michael Jackson’s death — as well all cable news going wall-to-wall in their coverage  — one can’t help but wonder how exactly this story fits in the pantheon of celebrity-death-cum-pop-culture stories.

Is it Princess Di? Probably not. Elvis? Times have changed. In fact, this story may eventually get its own cultural rubric “Michael Jackson’s Death” (because “Michael Jackson Coverage” is not specific enough.)

The truth is that this story is huge. Reports of the Internet breaking over the increased traffic caused by this story actually forced at least one professional skeptic to reconsider all cynicism built-up after years of having the “King of Pop” title shoved down his throat. Culturally speaking, we have a very complicated relationship with Michael Jackson and his death has forced some in the media to look into the man in the mirror.

We used to love him because he was cute — who hasn’t swooned while hearing the a cappella version of “I’ll Be There,” and the bass line of ABC was so infectious that we made a number 1 hit twice — so what if it was other people’s property (Funk Brothers.)

Then we loved him because he was HOT. White Hot. Like, the most amazing performer in the history of the world hot. Sure, much has been made by his performance of Billie Jean at the Grammy’s, but check out pre-solo Michael get his groove on and try not to be moved.

Then we were fascinated by him. He got weird — but in a safe and interesting way. It only played into his artistic mystique and the mainstream media loved it. A lot of units were sold with the Michael Jackson brand, and perhaps more importantly, he created a safe multi-cultural bridge during the gangsta rap and Rodney King era ’90’s. It didn’t matter if we were black or white — and Michael took that very literally.

Then things got weird. Really weird. So weird that, in deference to the dearly departed, we’ll choose to focus on the good parts of our memories. But court cases and legal dramas revealed a side to Michael Jackson that made a lot of people very uncomfortable (and rightly so.)

The pendulum of cultural opinion swung so far away from the accepted norm that the Michael Jackson sold units for the opposite reason as before — people wanted to know what the hell was going on with him. Tabloid magazines to networks news shows were dedicated to Wacko Jacko and a lot of soap was sold. Suddenly Jackson’s downward spiral was a nosedive that he couldn’t pull out of. So much so that, in a very weird way, his “untimely death” actually felt somewhat timely. Where was he going to go – what was he going to do?

Oddly – the very same media outlets that jumped on the “Wacko Jacko” narrative are now falling over themselves to fawn over his legacy. And yes, it would be unfortunate to focus on the decline of his career during a time of mourning. But it is worth noting that we culturally consumed a ton of Michael Jackson news – both good AND bad.

And while the mainstream media played the part in making him a star, they were equally a part of his decline. That would be a refreshing note to hear in the days to come.