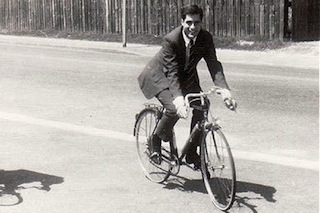 Well, talk about bad timing. Just hours after President Obama’s big announcement makes him look like a big hero to the gay community, the Washington Post publishes a lengthy report that makes Mitt Romney look like the villain in a crappy teen sex comedy. In it, they quote five of Romney’s classmates from the prestigious preparatory Cranbrook School who describe a cruel prank Romney allegedly engaged in back in 1965 in which he held down a crying student and cut his hair because the younger student looked different and was perceived to be gay.

Basically, the story is a couple notches away from revealing that Romney was a member of Cobra Kai.

“John Lauber, a soft-spoken new student one year behind Romney, was perpetually teased for his nonconformity and presumed homosexuality. Now he was walking around the all-boys school with bleached-blond hair that draped over one eye, and Romney wasn’t having it.

‘He can’t look like that. That’s wrong. Just look at him!’ an incensed Romney told Matthew Friedemann, his close friend in the Stevens Hall dorm, according to Friedemann’s recollection. Mitt, the teenaged son of Michigan Gov. George Romney, kept complaining about Lauber’s look, Friedemann recalled.

A few days later, Friedemann entered Stevens Hall off the school’s collegiate quad to find Romney marching out of his own room ahead of a prep school posse shouting about their plan to cut Lauber’s hair. Friedemann followed them to a nearby room where they came upon Lauber, tackled him and pinned him to the ground. As Lauber, his eyes filling with tears, screamed for help, Romney repeatedly clipped his hair with a pair of scissors.”

The article goes on to quote the other students saying that the prank went too far and they still regret it, with one, Thomas Buford, telling reporter Jason Horowitz “to this day it troubles me.”

Unsurprisingly, the story has already been pounced on by Democrats. The Democratic National Committee told reporters, “Key point: ‘It was vicious.'”

And, while the Romney campaign at first called the story “exaggerated” and that the candidate didn’t remember the incident, Romney has since told reporters like the Post‘s Philip Rucker that he “apologizes” for the “dumb things” in his youth.

Romney on h.s. pranks: “Back in high school, I did some dumb things & if anybody was hurt by that or offended, obviously I apologize.”

Romney: “I participated in a lot of hijinks and pranks during high school and some might have gone too far and for that, I apologize.”

Romney: “I certainly don’t believe that I thought the fellow was homosexual. That was the furthest thing from our minds back in the 1960s.”

While a lot of the focus of this story will be on the anti-gay component, it seems unlikely that that will move the dial too much. For one, the story, even if true, is literally 50 years old and even the most staunch progressives have probably said a hateful thing or two in the adolescent daze of a school locker room. Besides, gay voters will probably be much more interested in a more modern quote of the Republican candidates; the one from yesterday where he responded to Obama by saying legal same-sex marriage wasn’t his “preference.”

What I imagine will hurt Romney more in the long run is the image of him as a prep school bully, picking on weaker kids at an elite high school for the rich. If Hollywood has taught American voters anything over the years, it’s that kids like young Romney are evil and deserve to be defeated and have their girlfriend’s stolen before the big dance. They didn’t appreciate her anyway.

Besides, we did get one big piece of information out of this story. We now know the real reasoning behind Romney’s other big decades-old scandal; he didn’t put that dog on the roof because he’s a bad dog owner. He just did it as a prank because the gay hippie’s fur was too long.