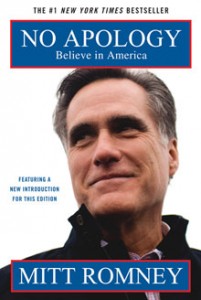 Mitt Romney’s 2009 book No Apology is getting a paperback release and, with it, a new introduction and a new subtitle (“The Case for American Greatness” is now “Believe in America”). However, that’s not the only changes in the new edition. A few sections of the actual text have been edited and it would appear that they were rewritten in an attempt to make the 2012 hopeful appear more conservative.

Some eagle eyes over at the Boston Phoenix caught the changes and have the details:

“The first rewrite excises a relatively even-handed assessment of the 2009 economic-stimulus package. In the original, Romney wrote that it ‘will accelerate the timing of the start of the recovery, but not as much as it could have.’ The paperback pronounces the stimulus ‘a failure,’ and blasts Obama’s ‘economic missteps’ with conservative red-meat language — for example: ‘This is the first time government has declared war on free enterprise.’
The other major change comes in a chapter on health care. In the original hardcover, Romney tried to carefully distinguish between the Massachusetts law and the national version that was nearing passage as he wrote.
But the Massachusetts model has become Romney’s bête noire among conservatives, who loathe the national reform they call ‘Obamacare.’ The rewritten paperback swings much harder, proclaiming that ‘Obamacare will not work and should be repealed,’ and ‘Obamacare is an unconstitutional federal incursion into the rights of states.'”

Obviously there’s nothing weird about books changing from edition to edition. Even Shakespeare’s plays looked different in different folios (for example, the famous King Lear version that has Greedo shooting first). However, what these differences show is that the Romney team has taken the lesson of the 2010 election and decided that he needs to move further to the right if he wants to win in 2012.

We’ll see if his gamble pays off and if voters can put down their Tea Party Reviews long enough to give No Apology another read.