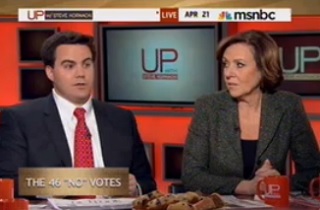 National Review Online‘s Robert Costa agreed it was Republican politics, and not a lack of effort from the President, that doomed the Toomey/Manchin compromise.

In the column, Dowd blames President Obama for getting a majority of the U.S. Senate to vote for expanded background checks, with scattershot advice about simultaneously “stroking” and “war(ring)” with senators, but the overall message is clear: everything is Barack Obama’s fault. The 42 Republicans who voted against the bill? Obama’s fault. He should have talked to his friend Tom Coburn (because we obviously know he didn’t), he should have given fewer speeches, except for the more speeches she wanted him to give, he should have been meaner and more strokey. The four Democrats who voted against the bill? Also Obama’s fault. The whole self-contradictory mess is peppered with bad facts (the President, or whoever, got enough Democrats to pass the bill in a straight up-or-down vote), bad conclusions (the people who require “stroking” and other “little things” are the “adults with power”), and just plain character assassination (did the President really care about the issue? Nah, “After the Newtown massacre, he and his aides hashed it out and decided he would look cold and unsympathetic if he didn’t push for some new regulations.”).

Most ridiculously, though, Dowd argues it’s Obama’s fault because if this were an Aaron Sorkin movie, it would have gotten done. I’m not kidding, that’s Dowd’s argument. Go read it. On Sunday’s Up with Steve Kornacki, Joan Walsh pointed and laughed at the premise, and tackled the  idea that the President could have done more to secure Republican votes. “I think that Maureen Dowd has a deeply stupid column in the Times today,” she said. “Any time you are citing The American President and West Wing, as an example of how politics should go, when you are a political writer, and you have sources?”

Walsh added that the President “had four Democrats that he could have brought over, but even if he got those four, he’s only up to 58,” and pointed out that New York Governor Andrew Cuomo, who managed to pass sweeping gun reform in the wake of Newtown, is “nowhere near the polarizing figure Obama is. The idea that Obama could have won over more Republican votes, I think, is preposterous.”

Conservative National Review Online writer Robert Costa agreed. “When you talk to Republicans, who supported Toomey/Manchin, they are glad the President was on the sidelines,” he said. “The minute the President weighs into this debate, Republicans say ‘We can’t deal with this.'”

He later added, “I don’t think the President could have done a lot to win Republican votes. They have only so much room to roam on the right. If you start to tiptoe towards the center, the grassroots really start to pay attention.”

On Monday morning’s Morning Joe, however, it was President Obama’s supposed failure to maintain party discipline that was the star of the show. Host Joe Scarborough (who, it should be noted, has been better on pushing for gun reform than many Democrats) agreed with Dowd that the President supposedly couldn’t twist arms in his own party the way George W. Bush did. As Joan pointed out, the defecting Democrats weren’t enough to overcome the Republican filibuster anyway, but the fact is that, had two more Republicans voted for the bill, thise four Democrats would have had a different decision to make. Had Republicans not filibustered, they would not have been necessary.

Not only did Scarborough completely ignore the Republicans’ obvious obstruction of the bill, his advice for the President was to “destroy” the four Democrats, who couldn’t have made the difference, by obstructing his own party. “Here is the deal,” Scarborough’s hypothetical Obama was to tell the likes of Heidi Heitkamp. “You vote out of fear if you want. You follow the lies if you want. I tell you what I’m going to do. I’m going to veto every single bill that comes my way that has anything to do with what you want to do.”

The thing is, Heidi Heitkamp has no illusions about what she will be facing from her left in her next election (a midterm), and an attack from the right might have been worth the risk if the bill got passed. As much as Joe Scarborough wants this to be the Democrats’ fault, and the President’s, it was the Republicans who filibustered the bill, and voted against it 42-4, and if anyone is going to be “destroyed” over this, it will be some of them.

The flawed logic and factual bankruptcy of Dowd’s column are so great that it’s easy to overlook the loaded contempt she displays for the President, but it needs to be mentioned. In one of her opening paragraphs, Dowd attacks the President’s ability to learn and relative cleverness by positing that the background check bill was defeated because the President lacks the know-how to “work the system. And it’s clear now that he doesn’t want to learn, or to even hire some clever people who can tell him how to do it or do it for him.”

It is that contempt, shared by Republican obstructionists in Congress, that led a minority of the Senate to defeat this bill, not the President’s lack of “cleverness.” Time will tell who reaps the whirlwind for it.