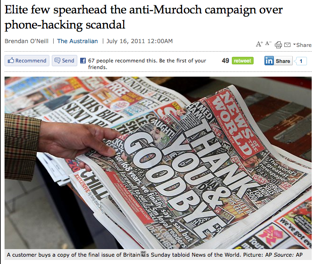 As the Murdoch Empire corruption scandal continues to unfold, the Wall Street Journal, one of its biggest entities, received plenty of mockery for a defensive editorial published today defending its leader and accusing rival organizations of excessive schadenfreude. It pales in comparison, however, to what some Murdoch entities overseas have penned– take, for instance, this blistering editorial in Murdoch’s The Australian, which throws the kitchen sink at Murdoch’s enemies.

The editorial, published on the 16th in Australia, depicts the Murdoch scandal as a “crusade” against free speech, beginning with a litany of complaints and celebrations from enemies of News of the World, only to declare that the “excitable hacks” comparing the scandal to the fall of the Berlin Wall and other major events “do a grave injustice to the freedom-hungry masses of yesteryear by lumping their struggles in with the media-led agitation against Murdoch. For no amount of shameless plundering of past democratic moments can disguise the fact that what we are witnessing in Britain is a media coup led by a tiny gaggle of illiberal liberals.”

Who, precisely, falls in this gaggle? Brendan O’Neill, the piece’s author, spares no names. In fact, perhaps the most scorching (and personal) bit of the editorial is the following paragraph on the enemies of News of the World in Britain:

The two politicians at the forefront of the crusade are John Prescott, former Labour deputy prime minister, and Chris Bryant, Labour MP. It can’t be a coincidence that both have been badly burned by Murdoch tabloids, finding their extramarital affairs (Prescott) or their penchant for posing in their Y-fronts on gay-sex websites (Bryant) splashed across their pages. Likewise, one doesn’t need a degree in political science to see why Hugh Grant has transmogrified overnight from floppy-haired actor into a one-man army against tabloid hacks: he’s never forgiven them for the fun they had at his expense after he indulged in certain roadside larks with a hooker in Los Angeles in 1995.

But the editorial doesn’t stop at attacking those who O’Neill claims to have personal vendettas against Murdoch, a list which also includes the editorial board at the New York Times and several other prominent politicians. This is not just a personal tiff. To O’Neill, it is a fight for free speech.

These self-interested crusaders may pose as warriors against alleged criminality in the tabloid press, but their true target is the culture of the tabloid press, the age-old arts of muckraking and sabre-rattling, which they consider vulgar and offensive. Under the guise of ending illegal phone-hacking, they’re really pursuing a culture war against what they view as the ugly, mass, populist media.

O’Neill concludes warning against the “homogenisation of the press, the straitjacketing of journalism, the enforcement of middle-class moral conformism.” In case it isn’t already clear, nowhere in the piece does O’Neill say anything about the rights of those being hacked, or of the corrupt relationship between the police and News of the World. Only in passing is there a reference to phone hacking, which O’Neill describes as a “guise.”

O’Neill may have a point that personal animosities may lead many who are currently after Murdoch down the witch hunt path, and of course a free press is integral to the health of any democracy. But the personal animosities do nothing to explain away the pain of the family of Millie Dowler, who thought their teenage girl may be alive thanks to the News of the World illegally deleting her voicemails. It does nothing to explain what those reporters thought they were doing snooping through the phones of victims of the September 11th attacks. And, most importantly, it does nothing to made Rupert Murdoch and his troubled enterprise appear more relatable or sympathetic to a global audience that has been given little evidence that News Corporation and News International deserves nothing but scorn for their work in the UK.