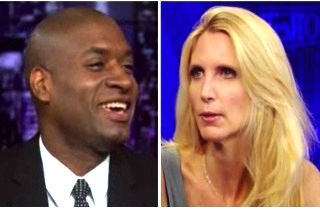 New York Times columnist Charles Blow will not be having lunch with conservative author Ann Coulter in the near future.

In his latest piece for the Times, Blow charges after the “absolute hysteria” taking place in the U.S. over the Ebola outbreak. He singles out a recent column by Coulter.

When Dr. Kent Brantly, a missionary caring for Ebola patients in Liberia, became the first known American Ebola patient, Ann Coulter called him “idiotic” and chastised him for the “Christian narcissism” of deigning to help people in “disease-ridden cesspools” rather than, say, turning “one single Hollywood power-broker to Christ,” which would apparently “have done more good for the entire world than anything he could accomplish in a century spent in Liberia.”

Oh, the irony of Coulter using this flummery to blast Brantly as idiotic.

There is, of course, the other side of Blow’s argument that says frustration over nine people in the U.S. contracting Ebola is more so a reasonable reaction rather than “absolute hysteria.” But deadly diseases just don’t rile some people so easily.

UPDATE — 5:28 p.m. ET: Coulter got back to us a few hours later and responded to the general point of Blow’s column, which was that the people calling for every measure possible to keep Ebola out of the U.S. are acting unreasonably. She said:

Here is my response to Charles Blow’s hysteria about ebola hysteria: No “barrier” is perfect. For example, the NY Times generally has a rule barring consideration of job applicants who are illiterate, but appears not to have honored this barrier when they hired Charles Blow. But barriers can keep out a lot!