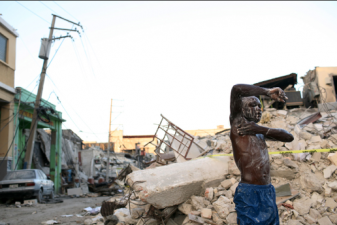 In Sunday’s public editor columns, both the New York Times and Washington Post ombudsman address the choice of their papers to run graphic photos of the death and destruction in Haiti. “It was hard to look at some of the pictures of suffering and death caused by the earthquake in Haiti — and impossible to turn away,” Clark Hoyt writes in the Times. And: “Given the magnitude of earthquake devastation in Haiti this month, Post readers expected to see photos of unspeakable suffering,” Andrew Alexander writes. “But many were not prepared for days of graphic depictions of death.”

Both pieces run through similar points of contention: some readers were offended by the horrible images, calling them “exploitive and sensationalistic,” while others were grateful for the paper’s honesty. Alexander defended the Post’s decision by concluding, “Journalism is about truth, and the horrific images convey reality. Photos, even unsettling ones, are meant to capture our emotions.” Hoyt also calls running the photos “right,” quoting a reader who wrote that “every one of his photos told the truth.”

The parallel columns tread lightly in similar fashion, acknowledging the gravity of the situations depicted on their front pages and websites, and each columnist does their best to serve their purpose as a sounding board for readers. The Times column, though, delves deeper thanks in large part to a hypothetical addressed by a reader: “If this had happened in California, I cannot imagine a similar depiction of half-clothed bodies splayed out for the camera.” Hoyt is told by a Times editor that similar pictures would run if the destruction was domestic, and cites a particularly brutal Hurricane Katrina photo that made the front page.

Both columns are worth a read:
Face to Face With Tragedy [New York Times]
Horrible images of death in Haiti [Washington Post]