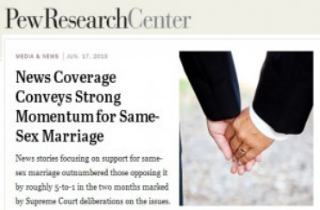 Stelter spends the first few paragraphs of his piece describing the study, and includes quotes that don’t appear to have been included in the final version of the study, but while his description is largely accurate, his conclusion is not:

The study lends credence to conservative charges that the nation’s news media have championed the issue of same-sex marriage at the expense of objectivity. Others have argued that news organizations are right not to overly emphasize opposition to what many see as a core civil rights issue.

The study itself did find large imbalances in the percentage of stories that were classified as “in support” or “in opposition” to gay marriage, even at Fox News, where supportive stories outnumbered opposing stories by nearly four to one: 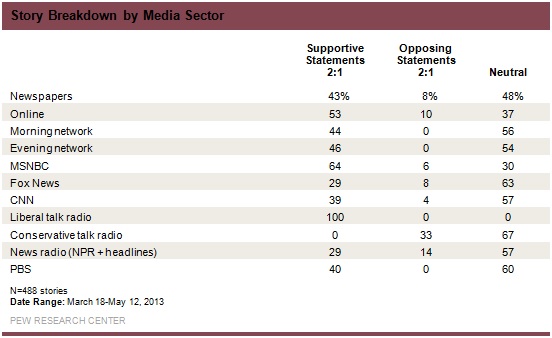 As Andrew Kirell pointed out earlier, though, Pew says that these results are heavily influenced by the actual news that’s occurring around marriage equality:

Many of the news stories identified as supportive of same-sex marriage focused on evidence that it was gaining more acceptance. For example, a March 19 edition of the PBS NewsHour included a three-minute edited package that discussed polls showing increased acceptance across all demographics. The same show also featured a longer piece that discussed the endorsements of same-sex marriage from people such as President Obama and Senator Rob Portman, and how younger people were at the forefront of changes in public opinion.

Throughout Pew’s report, they repeatedly cite real-world events which, if reported accurately, are counted as “supportive” of gay marriage. They also found that supporters of gay marriage had a much more consistent message than opponents, and that opposing commentators sort of fell asleep on the job:

Other elements may have also added to the greater focus on support versus opposition. Many of the newsmaking events in this time period indicated momentum towards same-sex marriage. These included endorsements from politicians, legislation at the state level and shifts in public opinion tracked by surveys. Second, during the week of the hearings, when most of the coverage occurred, the media offered many profiles of the plaintiffs or members of the LGBT community with few voices of opposition mixed in. Finally, commentators who favored same-sex marriage, such as Rachel Maddow and Chris Matthews, spent more time discussing the issue than commentators who opposed it, such as Sean Hannity and Bill O’Reilly.

The notion that mixed or neutral stories should be the ideal is belied by the facts, which show that, as Pew’s headline indicated, the media is accurately conveying the news about support for same-sex marriage. News outlets interview plaintiffs in gay marriage cases because they exist, while people who have actually had their straight marriages destroyed by marriage equality are in short supply. Even the most “unbalanced” coverage, MSNBC’s 64% supportive coverage, closely mirrors public opinion, which has approached 60% in some recent polls.

That is not to say that the Pew study necessarily demonstrates objectivity, because that’s a tough thing to measure with blunt statistics and public opinion. The public overwhelmingly supported Arizona’s “Papers, Please” law, and other states’ voter ID laws, while coverage of those issues undoubtedly ran the other way. True objectivity requires reporters to make judgments, which requires an ability to ignore shrieks of “bias” from people with a vested interest in de-legitimizing the media.

If this Pew study measures anything, it measures what it says it does: that the media is accurately conveying the state of the marriage equality debate. If there’s anything disturbing in it, it’s that, in the 21st century, there is still so much “neutral” coverage that pretends this is a 50/50 question, that maybe gay marriage is somehow a threat to someone else’s marriage. When the Jets are down by three touchdowns, you don’t expect half of the media to report that they’re still winning.