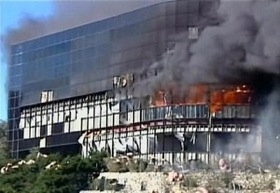 Joseph Stack, the pilot responsible for crashing a plane into the Austin IRS building, is simply too good of an albatross not to hang on someone’s neck. As accurately predicted here on Mediaite, he has already been branded both a liberal and a conservative, a terrorist and a domestic extremist, and every possible politically charged label in between. Stack’s ideologically convoluted suicide manifesto created more questions than it answered, leaving more opportunity for exploitation, and this morning, the New York Times took the bait, asking about Stack, “The First Tea-Party Terrorist?”

Columnist on the NYT “Opinionator” blog Robert Wright today took on the task of accommodating the pilot into the wide world of political labels, and while the piece is not as offensive to the Tea Party movement as the title threatens it could be (in part thanks to a cluster of post-script disclaimers), Wright’s fundamental misunderstanding of the American right prohibits it from articulating a coherent point, or completely addressing his initial point that evidence for Stack being a left of center does not imply he is also not a Tea Party ideologist. “I’m not sure how purely conservative the Tea Party movement is anyway,” Wright comments. “Yes, it mobilized against a liberal health care bill and the stimulus package, but it also opposes corporate bailouts.”

It is a strange argument to claim that the fact the Tea Party movement does not support excess government spending somehow makes them liberal. Wright is still defining conservatism as Republicanism, when the label Republican has been reappropriated to the liberal spending policies of the Bush era. Even today the RNC is having an issue or two with administrative splurging. Thus, to Wright, “conservatives” are in favor of dumping large amounts of tax money on problems and hoping they go away, whether the problem be the economy, the education system, or foreign policy (if we count the invasion of Iraq as “throwing military spending” onto the Al-Qaeda problem). This core misunderstanding skews the entire piece, as Wright continues to explain, perplexed, that some Tea Partiers are engaging in a “left-wing critique of military engagement.” That “left-wing” critique of military engagement is not so much left-wing as it is a libertarian insistence on keeping to ourselves as a nation unless national security is significantly jeopardized. One can only assume that Wright is confusing this with the neo-conservative desire to impose American values on nations across the world, much more akin to the paternalistic philosophies commonly found on the left than the lassaiz-faire attitude of the right.

He concludes that, “in the end, the core unifying theme of the Tea Partiers is populist rage, and this is the core theme in Stack’s ramblings, whether the rage is directed at corporate titans (“plunderers”), the government (“totalitarian”) or individual politicians (“liars”).” Once again, the idea that those three entites are separate in the mind of a fiscal and political conservative betrays a desire to fuse the American right into a Republican party that operates much further left of center than the people if often represents. The piece isn’t a hatchet job (in fact, Wright concludes that a moratorium on the world “terrorist” might be more productive that trying to stick the label on anyone), but it will make more than a few true conservatives upset at being so misunderstood.