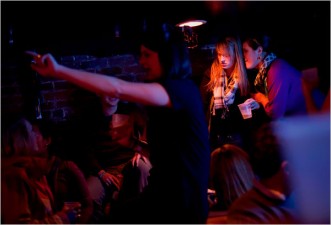 Girls looking for boys, because that's what they do in college

According to the leading two paragraphs in today’s New York Times feature on gender relations at colleges, here are the things that girls like: bars, beer, jokes and Taylor Swift. That’s “everything” – “except guys.” Here, let a college girl explain: “This is so typical, like all nights, 10 out of 10… because there are no guys.” When we weren’t looking men went extinct? Even “tight-fitting tops, hair sculpted, [and] makeup” can’t lure them out. And grandma said you’d catch flies with honey! Tight-fitting, sticky, sweet honey.

Well, sweetie, grandma didn’t snag her husband in 2010, when colleges like the University of North Carolina count female enrollment around 60% leaving it feeling “eerily like women’s colleges.” You know those times when about 11,000 men feel like zero — what’s a girl to do?

Like any good fake trend piece, a paragraph full of stats follows a few anecdotes: “Women have represented about 57 percent of enrollments at American colleges since at least 2000,” we learn. (100% – 57% = 0%!) And don’t get the Times wrong – they love smart women. A newspaper, sexist? Never: “[W]omen are primarily in college not because they are looking for men, but because they want to earn a degree.” Whew, safe – back to the generalizations about the struggles of self-worth sans male affection!

“My parents think there is something wrong with me because I don’t have a boyfriend, and I don’t hang out with a lot of guys,” says one girl. Well, girl, your parents are victims of the patriarchy and should probably bugger off and be glad you’re not blowing their dollars on contraceptives.

And then there’s the math wiz: “Out of that 40 percent, there are maybe 20 percent that we would consider, and out of those 20, 10 have girlfriends, so all the girls are fighting over that other 10 percent.” Slim pickings, indeed. You’d think at least one of those good looking dudes would be dumb enough to need calculus tutoring.

But, oh no, it’s not just about dating. You see, some schools are letting in males just for balance, passing over better qualified girls — it’s “affirmative action for boys.” And how will a girl ever find a husband to support her if she can’t get into a good enough college? And if she does get in, but it’s in place of a boy, her odds are lower still. Catch-22!

The answer, though, is sexual aggression: “I was talking to a friend at a bar, and this girl just came up out of nowhere, grabbed him by the wrist, spun him around and took him out to the dance floor and started grinding,” one girl remembers. It’s like a jungle out there and the hungriest lion is the one who feasts.

Still, “Girls feel pressured to do more than they’re comfortable with, to lock it down.” And cheating has to be chill, always, lest you be alone again: “[T]hat’s a thing that girls let slide, because you have to… If you don’t let it slide, you don’t have a boyfriend.”

Frankly, this is disgusting. And I say this with a penis. Could a more cliché collection of anti-feminist quotes and stereotypes be thrown into one Sunday article? Is this some sort of a joke — a comment on the ease of throwing together an offensive trend piece? Deleted scenes from He’s Just Not That Into You? An homage to Spencer Morgan? At least he’s funny.

To be fair, the article’s meatier second page approaches some substance, quoting a professor that says women are “paying a social price for success and, to a degree, are being victimized by men precisely because they have outperformed them.” Now that’s a thesis statement. But the academic undertones and “what it feels like for a girl” musings, buried in the piece, don’t negate the embarrassing moments for either gender, and the whole thing comes off as an obituary for the self-respect of young people.

Men, of course, are pigs, but laid back pigs: “It’s awesome being a guy,” says one. “You don’t have to work that hard,” says another. Girls, though, are high maintenance, sitting around “for 15 minutes trying to figure out what punctuation to use in a text message.” But what other choice do they have? You misuse an exclamation mark and the next thing you know, you’re “left alone on Valentine’s Day, staring down a George Clooney movie over a half-empty pizza box.” Then, you’re a spinster and your chance to have children vanishes forever and then you die. Alone.

On College Campuses, A Shortage of Men [New York Times]