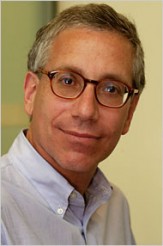 In his memo to staff Bill Keller called the appointment a “no-brainer,” saying that “after more than four years overseeing the integration of the print and Web newsrooms and the spectacular flowering of journalistic innovation that accompanied it, Jon yearns to get back to running coverage, to refresh his roots.” Full memo below:

After much deliberation, and a fair amount of not-even-in-the-ballpark speculation from Times-obsessed kibbitzers, we have a new culture editor to replace Sam Sifton. He is, I’m delighted to announce, Jon Landman.

Like the appointment of Sam as our new restaurant critic, this is one of those no-brainers that nonetheless requires some explaining because of the broader implications for the newsroom. After more than four years overseeing the integration of the print and Web newsrooms and the spectacular flowering of journalistic innovation that accompanied it, Jon yearns to get back to running coverage, to refresh his roots. I doubt anyone will question that Jon brings to the Culture Department a strenuous intelligence, an inspiring vision, a gift for getting the very best from people and — no small thing as our competitive landscape shifts — a keen appreciation of what
culture journalism can be on the Web. He spent a transitional year presiding over the department, implementing a sweeping overhaul of the department and grooming new leadership — including Sam Sifton — before he moved to the digital job. We interviewed a number of candidates, and were happily reminded in the process of the wealth of talent in our midst. But we’re pretty sure the other candidates would agree that Jon Landman will be an extraordinary culture editor. That’s the no-brainer part of the announcement.

While we’re on the subject of Culture, we would like to tip our hats to Amy Virshup, who has kept the department functioning at its customary high level in the weeks since Sam moved into vacation and tastebud preparation mode.
We have, of course, given intense thought to what this means for our digital journalism, which is so vibrant a part of our present and so central a part of our future. Our belief is that this is a moment to complete the integration of the newsroom we began five years ago.

As the deputy managing editor for digital, Jon has worked to bring down the psychological barriers, bureaucratic impediments, and we-don’t-do-things-that-way attitudes that separated the cultures of new and mainstream newsgathering. He has been a tireless champion of new ways to reach and engage our audience — journalism by unconventional means. He has advocated the full partnership of digital and print, journalism and technology. He has brought us an enormous distance toward the goal of a single, versatile, journalistic multiplex.

But not quite all the way. In proposing this change, Jon made a strong case that, in the next stage of integration, the support and promotion of this new kind of journalism must become more fully the responsibility of the newsroom’s top leadership — me, Jill and John. He reminded me that in the original proposal for an integrated
newsroom — May, 2005 — I insisted that it is not enough to create new advocates for Web journalism within the NYT newsroom; the newsroom would be truly integrated only when the top editors took as much responsibility for our digital journalism as they do for the more traditional kind. We’ve stopped a little short of that ambition, in large part because we had Jon to defer to and depend on. We’ll have more to say on this important subject, but the main thing to say now is that Jill and I, in particular, see this as time to rearrange our priorities and devote more of our bandwidth to digital journalism.

Jon will not be extracting himself from the Web, not by a long shot. He will, of course, be deeply engaged in the Web as culture editor. He will also be part of a new advisory group that will work closely with me, Jill and John, counseling us on the continuing development of Nytimes.com and assuring strong advocacy of innovative ways to touch our audience.