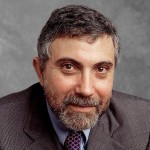 Yikes! This morning in his blog, Conscience of a Liberal, New York Times columnist Paul Krugman takes a swipe at the Times’ competitor, the Washington Post, as well as two of their more well-known columnists, Dana Milbank and David Broder. Krugman writes:

I don’t usually bother looking at the Washington Post. But I’m inside the Beltway right now, so I spared a peek — and for my sins ended up reading Dana Milbank, who praises Obama for punching the hippies.

So far, so usual. But then I read this:

This is a hopeful sign that Obama has learned the lessons of the health-care debate, when he acceded too easily to the wishes of Hill Democrats, allowing them to slow the legislation and engage in a protracted debate on the public option. Months of delay gave Republicans time to make their case against “socialism” and prevented action on more pressing issues, such as job creation. Democrats paid for that with 63 seats.
Um, that’s not what happened — and I followed the health care process closely. The debate over the public option wasn’t what slowed the legislation. What did it was the many months Obama waited while Max Baucus tried to get bipartisan support, only to see the Republicans keep moving the goalposts; only when the White House finally concluded that Republican “moderates” weren’t negotiating in good faith did the thing finally get moving.

So look at how the Village constructs its mythology. The real story, of pretend moderates stalling action by pretending to be persuadable, has been rewritten as a story of how those DF hippies got in the way, until the centrists saved the day.

UPDATE: Krugman appears to be picking a fight with the Washington Post Opinion team today, as he just published another short item on his blog — this time taking a swipe at Washington Post columnist David Broder. He says:

Remember, Broder declared that Katrina would boost Bush’s image, by showing his forcefulness as commander-in-chief — and then spent the next three years predicting a Bush comeback just around the corner.

And yes, the column is actually titled “Centrist on the rise.” You can’t make these things up.