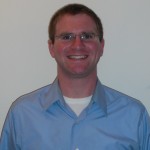 Several months back, I attended an all-female panel assembled to discuss why women don’t typically participate on media panels. I noted in my review that “the goal was to demonstrate to future conference planners and columnists that women offer a unique voice and belong on the panelist circuit.” As these issues take great deals of time to resolve, it’s difficult to believe that any real progress has been many in the two months since this initiative was made. What is clear now, though, is that the world is starting to notice the missing women.

This week’s New Yorker contains a cartoon depicting a panel of male professors debating the subject of “why are there no women on this panel?” Evidently, one of the magazine’s cartoonists spotted the same trend. Here it is: 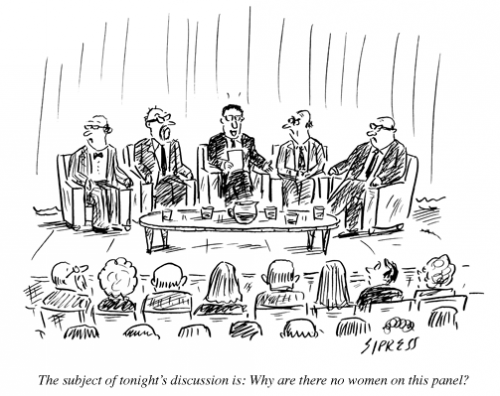 Yes, there’s something inherently ironic about a group of men talking about why women are left out. This cartoon is not just a satirical commentary about an sad, existing and arguably sexist pattern. It highlights the troubling reality that we sometimes go through the motions of floating ideas of reform before ultimately falling short of any definitive plans for improvement.

Improvement not just in the organizational make-up of the panel to provide diversity and different perspectives, but also improvement to make panels better as a result of this diversity. Which is what makes the cartoon itself so astounding for a separate reason. For this panel of four older, bespectacled white men, there appears to be a packed house on hand. My experience attending panels tells me that there’s no way that this event would draw such a large and brave (front-row seats are always the last to fill) crowd. It’s possible then to take a different read on the image.

The characters’ clothes, expressions and overall look  remind me of a Nixonian cabinet meeting. It resembles a boys’ club gathering put together under pretenses of social equality. This type of single-sex preference flew in the 1970s before social advances fully set in. In today’s fairer world, it isn’t acceptable for men to act on the other gender’s behalf anymore. I think that’s really what drives home the truth in this cartoon’s commentary – there was a time in recent memory where these kinds of gatherings would occur without protest. Since then, though, men have evolved and come to their senses in recognizing that there could be a place for women at the table alongside them.

Such is the predicament that faces panel organizers today. Efforts for social equality have opened the doors for the next step: gender neutrality. Good-natured, accomodating and sensible people are willing to hear suggestions for ways to get more women more active in public lectures, sessions, seminars, expos and panels. The frustrating thing is that in spite of changes that would permit increased female participation, the struggle remains. It’s morphed from one about convincing men to allow women inside to being one where both genders are convincing women to go ahead and take the seats being offered to them. It’s an improvement, no doubt, but a more peculiar and painful predicament lingers. These things take time. The New Yorker‘s done its part to show how far the conversation has come, even if it’s done behind closed doors.