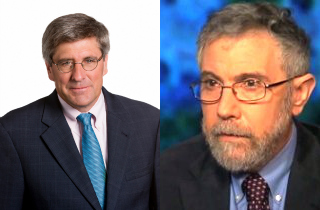 Then Kansas City Star columnist Yael T. Abouhalkah compared Moore’s job data to that from the Bureau of Labor Statistics. Moore had cited figures in which low-tax states like Texas and Florida had gained jobs over the last five years while higher-tax states like California and New York lost them. Turned out, he was using stats from 2007-2012 (which included the financial collapse); data from the last five years erased that trend.

As Hiltzik and others showed, even the data he cherry-picked from 2007-2012 was wrong:

[…] Moore’s effort was worse than cherry-picking–it was akin to trying to pick cherries in an apple orchard.

The op-ed now has the following editor’s note:

And the following corrections:

Notice how the “oops” now appears to refer to the actual mistakes of the author, not the supposed ones of his opponents.

“I do regret the mistakes in my piece,” Moore wrote in an email to the Star. “My point is that they don’t change the conclusion that the no income tax states have substantially outperformed the high income tax states over every period since about 1970.”