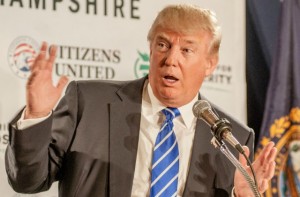 The 2016 presidential election is a tough terrain on which to be a mainstream journalist, tasked with covering the bombastic likes of Republican presidential frontrunner Donald Trump in a way that both exploits his eye-ear-and-throat-grabbing persona, and yet adheres to the lukewarm journalistic neutrality that passes for objectivity these days. That strange split-personality coverage is shot through a new analysis by Newsweek that compares Trump to European demagogues past and present, yet fears taking that analysis anywhere near the finish line. It’s like watching a game of fascist-comparison ping pong:

Critics and comedians have compared Trump to Adolf Hitler, Idi Amin of Uganda and other notorious demagogues, suggesting the mogul would govern like a murderous autocrat. That’s a stretch. What is abundantly clear, however, is that the Trump campaign is employing many of the political tactics those men used so effectively. And he joins a crop of politicians currently using a similar strain of politics to amass power in Europe and elsewhere.

….Which is not to say Trump is the next Hitler or Mussolini. Using a similar playbook doesn’t always result in the same outcomes. Still, there’s some irony in the fact that a man whose pitch to voters is “America first” is selling a message manufactured overseas—just like those Trump suits and ties.

Watching this kind of political coverage is a lot like being a 911 operator who’s sitting on the phone with a caller trying to describe, at length, something they think is maybe akin to flames, but that they’re not quite sure is a fire. You just want them to hang up, or put someone else on the phone.