Nicholas D. Kristof Cuts the ‘D.’ Out of Byline, Calls It ‘Ostentatious, Even Priggish’

Nicholas D. Kristof Cuts the ‘D.’ Out of Byline, Calls It ‘Ostentatious, Even Priggish’ 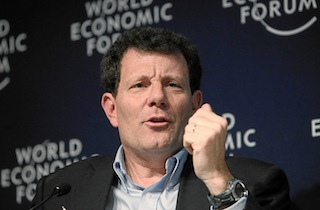 Yesterday, readers of The New York Times were aghast with the arrival of a new columnist to its famous op-ed pages — an unknown hack, a random interloper who wished to have a reputation as a writer who could “reach people and connect with them;” a literal nobody, who went by the name “Nicholas Kristof.”

Turns out that it was actually NYT veteran Nicholas D. Kristof, who announced that he was dropping the “D.” from his byline, 32 years after The Harvard Crimson made him put it in there.

Kristof explained in a blog post yesterday that after he left Harvard and joined the Times, he kept the “D.” in his byline in an attempt to be considered adultlike. “The middle initial adds a bit of authority and gravitas, and when you’re a 25-year-old Times reporter covering global economics and hoping to be taken seriously, that’s very welcome.” (He also admits that back then, he “wore a business suit and the middle initial was a nice accoutrement to pinstripes.” Hello, we are surprised.)

I think in the Internet age, the middle initial conveys a formality that is a bit of a barrier to our audience. It feels a bit ostentatious, even priggish. If my aim in my 20’s was gravitas, now I want to reach people and connect with them, and I wonder if the stuffiness of the middle initial isn’t a little off-putting. I doubt if it makes much difference, frankly, but at the margin I think that we’re moving to a kind of journalism that is more casual, more informal, more personal, and a very formal byline seems as out of place as a three-piece suit in the newsroom.

But has the new, trendier, laid-back Nicky Kristeezy actually grown casual and informal, and — this is the real test — can he stop trying to insert gravitas in everything he ever writes, ever?

Bah hah hah are you kidding.

My byline tweak http://t.co/TU7rqUgXbU getting more Internet buzz than my column on 200,000 trafficked kids http://t.co/O4kNcCNUun

(Fun fact: The “D.” in “Nicholas D. Kristof” stands for “Donabet,” which is, presumably, Medieval French for “I Am Now Aware That I Have Been A Pretentious Ass Since I Was 25; Oh God, What Have I Done.”)