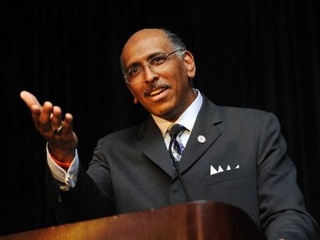 Perhaps Jon Stewart‘s goodbye to puppet Michael Steele came a bit too soon, as the former RNC chair is already reportedly preparing to return to what he does best: good political TV. Steele, whose RNC tenure is marked by his quotable cable news performances, may be returning to cable news on the inside rather than out– the New York Post hints that two major cable news networks are courting the controversial former chairman.

The New York Post is reporting that Steele may be a permanent presence on cables news long before the public has forgotten his RNC tenure. “Fox News and CNN are both talking to former RNC chairman Michael Steele about coming on as a paid contributor,” the paper reports, though notes that neither network has officially stated that they are negotiating. CNN declined to comment to the paper, while Fox News simply replied that they are talking to “several potential contributors” without naming any. The report is based on “a source.”

This is consistent with Steele’s comments earlier in the week that he sees a place for himself in the political future “doin’ some TV here and there,” with where he will ultimately land likely more of a business issue than what positions he will likely take. Many former party chairmen– equally colorful DNC chair Terry McAuliffe comes quickly to mind– took to the airwaves once their responsibility to the party was fulfilled. Yet Steele’s timing to acquire a regular platform on TV, should the reports be true, must be troubling for those in the Republican Party that voted him out. His potential antics may be of particular concern to new chairman Reince Preibus, who is routinely described as mild-mannered and low-key and may now have to compete with Steele for attention.