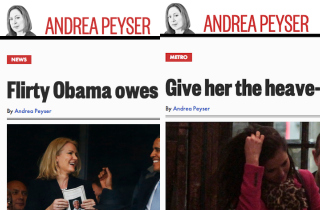 Peyser begins both by supposing her subjects are pillars of inviolable moral rectitude before their precipitous sewer-plunge:

On Obama: “The president of the United States, leader of the free world, standard-bearer for everything upright, good and wholesome about the nation he leads, lost his morality, his dignity and his mind.”

On Spitzer: “Spitzer is the whoremonger who lost his bed in New York’s governor’s mansion after he bargained for reduced-price female flesh like a millionaire john on a budget, shaming not just himself, his suffering wife, Silda, and his three daughters, but all good citizens who entrusted him with upholding the law.”

Then she likens the male subject to a frat boy:

On Obama: “…act[ed] like a hormone-ravaged frat boy on a road trip to a strip bar.”

On Spitzer: “Now Eliot has been caught by The Post like a frat boy on a late-night booty call.”

…calls the offending female a bimbo:

On Thorning-Schmidt: “…a blonde bimbo who hadn’t the sense to cover up and keep it clean.”

On Smith: “This is not just any ordinary bimbo.”

…focuses on the sheer prurience of black sock-wear:

On the black stockings of Thorning-Schmidt: “the Danish hellcat hiked up her skirt to expose long Scandinavian legs covered by nothing more substantial than sheer black stockings.”

On the black socks of Spitzer: “the randy Democratic operative who’s got a freaky fetish for the black knee socks and balding pate of married ex-Love Gov Eliot Spitzer.”

…casts some pretty bold aspersions about the offending female’s licentiousness and even potential prostitution, based on zip:

On Thorning-Schmidt: “The president leaned into the air space of the cross-legged Danish cupcake, who is known in Copenhagen as a fan of America’s randy TV show Sex and the City.”

On Smith: “Lis, who presumably does not charge Eliot for services rendered…”

On Thorning-Schmidt: “One Danish Facebook user called the antics of a president of 52 and a prime minister of 46 ‘frivolous and disrespectful.’ Another said it was ‘extremely inappropriate and embarrassing.'”

On Smith: “As one veteran public-relations expert said, ‘If I were de Blasio, I wouldn’t want someone close to me sleeping with Eliot Spitzer.'”

…and finishes with a demand to return to a land of innocence which we supposedly inhabited until the bro/bimbo brigade pulled up:

On Obama: “But people won’t soon forget the escapades of the people whose salaries they pay. President Obama has some ’splaining to do. To the woman he married. To his daughters. To the people of South Africa. And to the scandalized folks here at home.”

On Spitzer: “The union of the ambitious, youngish cookie and the megarich heir to Daddy’s real-estate empire has cemented New York’s image as a sexual mosh pit in which male politicians (Spitzer, Anthony Weiner) forget their marriage vows, and women use married degenerates to advance their careers. I hope Lis and Eliot enjoy a long, happy life living in sin. Just do it somewhere else.”

Now that I think about it, it’s almost as if New York Post columnist Andrea Peyser has a one-size-fits-all pump for inflating political pseudo-scandals. Too bad these exercises in faux-umbrage are accomplished on the backs of women who have done nothing worse than a holding public job while being female. On that note, see Alexis Grenell’s spot-on piece about how quickly any powerful woman can be reduced down to “bimbo” for the sole crime of dating someone.