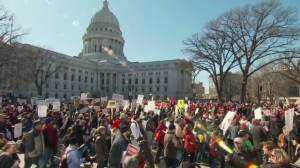 Last Tuesday, the New York Times ran a story about eroding support for unions in Wisconsin, best personified by the “union guy,” who supports Gov. Scott Walker‘s decimation of collective bargaining, in the story’s lead paragraph. The story was so compelling, in fact, that Governor Walker recommended it to Fake David Koch during their now-infamous prank call, calling it “one of these unbelievable moments of true journalism.”

As it turns out, though, the disillusioned “union guy” was never in a union, which makes me wonder if this whole thing isn’t really an outtake from Inception. (h/t FOK News)

So far, I have only linked to Keith Olbermann‘s takedown of the Times because Olbermann has the original text, and NYT‘s original piece has since been amended, along with the following correction: (made four days after the fact, and far from the front page where the mistake ran)

A front-page article on Tuesday about reaction among private-sector workers in Wisconsin to Gov. Scott Walker’s effort to cut benefits and collective-bargaining rights for unionized public employees referred incorrectly to the work history of one person quoted, and also misspelled his surname. While the man, Rich Hahn (not Hahan) described himself to a reporter as a “union guy,” he now says that he has worked at unionized factories, but was not himself a union member. (The Times contacted Mr. Hahn again to review his background after a United Auto Workers official said the union had no record of his membership.)

Yes, they even spelled the guy’s name wrong. All the nooz thatz fit too primt.

Now, everyone knows that corrections always get short-shrift, but it is particularly galling when the error completely changes the thrust of the piece in which it appears. In this case, the Times story goes from one union guy who agrees with Scott Walker, to zero, and the balance of the piece featured interviews with people who support the cuts that the unions have already agreed to, and were split on the issue of collective bargaining. Sample bit of genius from an anti-union worker at a billboard advertising company:

“I know there was a point for unions back in the day because people were being abused,” she said. “But now there’s workers’ rights; there’s laws that protect us.”

That’s right, and those laws can never be changed! It’s not as though there’s some kind of movement to take those rights away, right?

Olbermann seems rather enamored of the possibility that Mr. Hahn might possibly be some kind of right-wing mastermind (even though the fact that the Times spelled the guy’s name wrong strongly suggests sloppiness), but for my money, the best part of this is that Walker related the story about the fake union guy to the fake David Koch who prank-called him:

Courtesy Michael Moore’s website: Governor Walker had already clipped and saved the story of the phony union man Hahn – and even boasted about it to the guy he thought was his puppet-master David Koch:

SCOTT WALKER: They moved out two years ago. The lead on this story’s about a guy who was laid off two years ago, he’d been laid off twice by GM, who points out that everybody else in his town has had to sacrifice except for all these public employees, and it’s about damn time they do and he supports me.

The scary part is, the Times is certainly not alone in sloppily reporting on this story. Without looking all that hard, I’ve written four or five stories about sloppy and/or erroneous reporting on the Wisconsin story in our own back yard, while journalism is enjoying a renaissance half-a-world away in the Middle East. Wouldn’t you think it’d be the other way around, especially when it’s the supposedly liberal media covering “their own?”

You might almost think that TV, print, and cable operations had something to gain by crippling collective bargaining. Nah, it’s probably that devious mastermind Hahan.