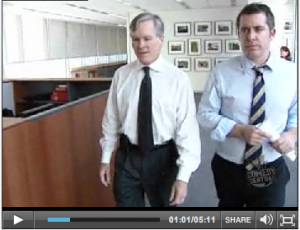 The New York Times‘ Executive Editor Bill Keller is answering “10 Questions” from readers at Time this week. Some highlights:

Why do you think the press gave the Bush Administration a free pass on the misleading statements it made to get us into the war in Iraq? Randal Davis, PORTLAND, ORE.

It was partly the insatiable desire for scoops people in the Administration were feeding about the potential threat in Iraq. But a lot of it was just that we floated along with the conventional wisdom, the worst enemy of journalism.

The Times had no problem leaking state secrets, claiming the truth required that they be published. Yet it had no qualms lying about the kidnapping of one of its reporters to protect his safety. What is the difference? Bob Dame CHARLOTTESVILLE, VA.

The fact is, we sometimes withhold information from print either because we’re convinced that publishing it would put lives at risk or to protect national security. We’ve done that not only in the case of [kidnapped reporter] David Rohde but other kidnappings as well. We’ve done it in the case of state secrets. But we can’t surrender to the government all the decision-making power.

You recently appeared as part of a Daily Show segment that treated the paper as a comical anachronism. How do you respond to those who seem eager for newspapers to die out? Tommy Giglio, CHICAGO

Well, that’s the last time I try to be a good sport. Even my wife told me that I looked faintly ridiculous, and she was trying to make me feel better. Among the people who would miss us most would be the wise-guy pundits and scriptwriters for satirical TV shows, because they riff on the news we produce.