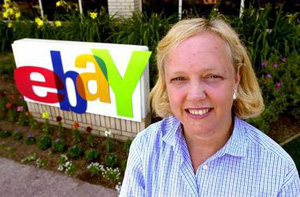 Before Meg Whitman was California’s Republican candidate for governor, she was the CEO of eBay. During her time there, Whitman was reportedly accused of becoming angry and “forcefully” pushing another employee. The employee, Young Mi Kim, threatened a lawsuit, but the matter was settled for “around $200,000.”

According to the New York Times, in June 2007, when Kim was preparing Whitman for a news media interview, “Ms. Whitman became angry and forcefully pushed her in an executive conference room at eBay’s headquarters, according to multiple former eBay employees with knowledge of the incident.”

In addition to the financial settlement, an “agreement to keep the matter confidential was also part of the settlement, and the authorities were not involved.” Kim, who is now a senior manager for corporate and executive communications at eBay, told the Times that she and Whitman had let bygones be bygones:

“Yes, we had an unfortunate incident, but we resolved it in a way that speaks well for her and for eBay,” Ms. Kim said. “And ultimately, I came back to the company, which is not something I had to do.”

Whitman’s campaign responded with an official statement, calling Kim a “respected colleague and valuable asset” to the company:

“In any high-pressure working environment, tensions can surface,” the statement said. “Young Mi and I had a professional disagreement, which we put behind us. She and I continued to work together at eBay, where I valued her skilled counsel and thorough professionalism.”

Exemplifying her background in management at eBay has been central to Whitman’s campaign. But the report also suggests the incident was an “anomaly.” Former executives said she was demanding, but they “knew of no other similar accusations.”

The report comes following Congressman Bob Etheridge‘s responding quite physically to being asked him if he supported “Obama’s Agenda.”