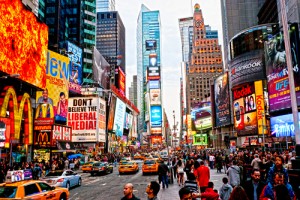 An op-ed in Monday’s New York Times suggests that two of the top presidential candidates at the moment have achieved their status due to their New York accents. Popular and contemporary notions from sociolinguistics — the study of language and society — are invoked to back up the claim. However, it sounds more like yet another prideful boast about New York from yet another New Yorker with a loudspeaker.

Michael Newman, a professor of linguistics at Queens College and the Graduate Center of the City of New York, argues that having a New York accent “can help you get ahead” in “Voters May Just Want to ‘Tawk.'” His evidence? Well aside from his being the author of New York City English, a monstrous academic text priced at $42 new on Amazon, Newman points to the high poll numbers maintained by Donald Trump and Bernie Sanders, born in Queens and Brooklyn respectively.

“Other politicians with no hint of New York in their speech, such as Hillary Clinton and Jeb Bush, would likely love to have ‘telling it like it is’ as part of their brand,” says Newman. “Only Chris Christie seems to even come close. See a pattern?”

Wait, so Trump and Sanders are leading the Republican and Democratic parties at the polls because they sound like they’re from New York? Sure, Newman points out that both candidates share an “upstart, outsider image” and “a posture of forthrightness and candor,” but these are mere window dressings. Language is what the game is all about, especially the English language as used (and abused) by native New Yorkers.

According to Newman’s reading of Georgetown University linguist Deborah Tannen‘s observations, “New Yorkers tend to have a different conversational style than other Americans.” Specifically, they “favor being more direct.”

“We speak over one another, particularly to show our engagement with what our interlocutor is saying. We like to tell long stories,” he Newman, adding: “And we don’t mind arguing as long as it is not too personal.”

Ignoring the fact that Trump actually prefers arguments that are very personal (when directed by him at someone else), what is Newman’s actual evidence? Is the coincidence that the two top-polling presidential candidates are both from New York? Their shared love of argument? Their outside-the-system branding? None of the above, for what Newman points to is what sociolinguists call “indexicality.” That is, “the way that forms of speech entail social meanings.”

On the one hand, Newman’s logical connections make complete sense. He is, after all, a well-educated and studied linguist and college professor. On the other hand, his suggestion that Trump and Sanders’ successes are due to their New York accents totally ignores a plethora of non-linguistic factors. This makes sense because he is a linguist, and therefore provides linguistic analysis of the 2016 election season. He’s likely way better at it than, say, analyzing current political trends as a political pundit, an economist or an underwater basket-weaver.

As for the inherent everything-is-about-New-York mentality, this is an op-ed about two presidential candidates from New York, with New York accents, in New York City’s paper of record. All it needs is an official comment from the white guy who railed against “white privilege” in Brooklyn in order to achieve its true potential.