Obama Recounts Personal Experiences with Racial Profiling, Including Being Mistaken for a Waiter 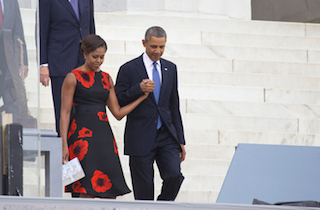 “There’s no black male my age, who’s a professional, who hasn’t come out of a restaurant and is waiting for their car and somebody didn’t hand them their car keys,” Obama said, including himself.

“He was wearing a tuxedo at a black-tie dinner,” recounted Michelle of another experience, “and somebody asked him to get coffee.”

Obama has had to thread the needle since the shooting death of Michael Brown, and the subsequent grand jury decisions in Ferguson and then Staten Island, propelled racial profiling back into the national dialogue. Many want the first black president to directly address racial inequalities in law enforcement and the justice system, while others charge, somewhat incredibly, that doing so fosters racial division.

To the latter Obama has stressed the progress made since the Civil Rights movement, something he reaffirmed in the People interview.