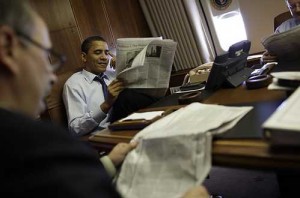 Self-described “newspaper junkie” President Barack Obama weighed in on the shambolic state of the newspaper industry yesterday, and said that he’d be “happy to look at” legislation that let newspapers get tax breaks if they restructured as nonprofits.

Naturally, this is already being spun to oblivion as the door to another accursed bailout. But does that storyline check out?

1. Though this has already spawned headlines like “Obama open to newspaper bailout bill” and “Obama considers newspaper bailout,” in the context of his interview with the editors of the Toledo Blade and the Pittsburgh Post-Gazette, Obama’s was a vague and noncommittal statement; he was asked about specific legislation, said he’d be open to it in theory, and moved on.

2. Even if Obama put his weight behind the main bill under consideration — which he hasn’t at all — it’s not exactly a “bailout” in the sense of giving public money to papers; rather, it reduces their tax burden if they become nonprofits.

The Hill‘s Blog Briefing Room describes the current frontrunner in the Senate as “S. 673, the so-called “Newspaper Revitalization Act,” that would give outlets tax deals if they were to restructure as 501(c)(3) corporations.” Here’s a fuller summary, from THOMAS:

[S. 673] Amends the Internal Revenue Code to exempt from income taxation a newspaper corporation or organization if: (1) it publishes on a regular basis a newspaper for general circulation; (2) its newspaper contains local, national, and international news stories of interest to the general public and the distribution of such newspaper is necessary or valuable in achieving an educational purpose; and (3) the preparation of the material contained in such newspaper follows a methodology generally accepted as educational.

There’s a lot to pick at in that language: “educational” is always a loaded word (do Lifestyle section articles on Megan Fox count?), and the rules on advertising at the end sound like a potentially exploitable loophole. But if the bill went forward, it would probably be tightened up, and anyway the bill has been sitting around in committee since March, not the best sign for its viability. So: huge leap to make this Obama’s baby.

Remember, kids: if Obama kind of sounds like he’s sort of saying something about something, it’s not always a fiery bailout proposal and/or socialism.

via The Daily Beast