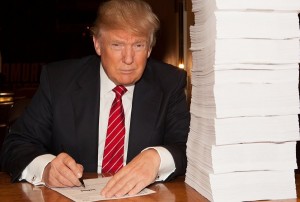 On Friday morning, Hillary Clinton‘s campaign sent out a national “In Case You Missed It” press email pointing to a new Washington Post article entitled “Trump’s income tax returns once became public. They showed he didn’t pay a cent.” The article surfaces a 1981 New Jersey Casino Control Commission report that includes tax information that Trump submitted as part of his application for a gaming license, and contains a tantalizing hint at what might be in Trump’s more recent returns:

State records show that Trump claimed that his combined income in 1978 and 1979 was negative $3.8 million, allowing him to pay no taxes. A few years earlier, he had told the New York Times he was worth more than $200 million.

Tax analysts say it is possible that Trump pays very low income taxes, or no taxes at all, using tactics available to wealthy investors and developers, such as depreciating the value of real estate.

While there may be other secrets to learn from Trump’s tax returns, Donald Trump has, for months, fairly boasted that he pays as little as humanly possible in taxes.

What’s odd is that this Washington Post report doesn’t, at the time of this writing, contain a link to the actual report, which even more oddly was first reported over a week ago, buried in a Glenn Kessler “Fact-Checker” column, which is also not cited in the new article that’s being disseminated by the Clinton campaign. You can read the full New Jersey Casino Control Commission report below:

Report on Donald Trump to Casino Control Commission by GlennKesslerWP