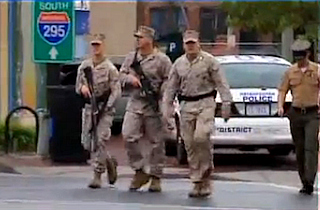 Today, the US Navy confirmed something we’ve long believed to be true: they’ll come up with any ridiculous reason to deny nosy reporters, waving around pesky Freedom of Information Act (FOIA) requests like tiny wooden swords, their legal right to poke through the government’s Secret Data.

The reason we know that: today, they told us (by accident.) Specifically, the Navy’s public liaison Robin Patterson accidentally forwarded detailed notes, in which she laid out the reasons to deny a reporter his FOIA request concerning last December’s Navy Yard Shooting, to the very reporter himself. (Or maybe she hit the “Reply All” button by accident, which, seriously, stop doing that.) POLITICO reports that the FOIA request specifically asked for “memos authored by various Naval Sea Systems Command officials in September, October and Novemer 2013, e-mails sent by those same officials…on the day of the shooting, and photos of Building 197, where the shooting occurred, that were not part of the investigation.”

According to the screenshot of the notes, which the investigative reporter in question (Scott MacFarlane of NBC-4 TV in DC) posted on Twitter, the memo discussed specific reasons to deny his requests, which include the following:

He wasn’t specific enough: Language from MacFarlane’s email, as well as the email’s title itself, suggested that he was looking for photos of the interior of one of the Navy Yard’s buildings. “This request is too broad for the specific event,” the memo reads, adding:

If you discover that there is a “photo library” [containing images of the building in question], I would recommend negotiating with the requester, or explain that the library does not contain a subject “interior of building 197″…after you get more record keeping info from Public Affairs, Josh can help with crafting the language for “fishing expedition,” or request to [sic] broad.

He was too specific: There is such a thing as asking exactly the right question at the right time, such as, to paraphrase, “Can you please send all the emails sent between various Navy officers between 8:00 and 9:30 AM on the morning of the shooting?”

“This one is specific enough that we may be able to deny. However, I want to talk to the FBI, as they may have ‘all emails during that time, in their possession.'”

The Passive-Aggressive Cheap Mom Approach: In which they say that it’s going to cost a lot of money to redact sensitive information from the memos in question, and sure, they’re willing to do it, but can a media outlet really afford to do that? Really? Weren’t you saving up for a bike?

Recommend that you provide the requester with an estimate, as I can see the search and review, possible redactions, will be very costly. Again, another “fishing expedition” — just because they are media doesn’t mean the memos shed light on specific government activities.

The US Navy eventually apologized for writing about MacFarlane in its burn book:

US Navy has apologized to @MacFarlaneNews for FOIA response re: Navy Yard Building 197 materials