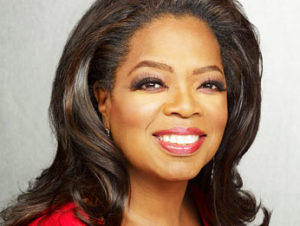 In a cover story in this Sunday’s PARADE Magazine, Oprah Winfrey talks about leaving her hugely successful daytime talk show Oprah for the risky venture of starting a new cable network, the Oprah Winfrey Network, or OWN: “This is a gamble I’m taking.”

Winfrey says the lure to go ahead and take the risk comes in part from a belief that most of cable television is lousy, and that–if things work as she hopes when OWN launches January 1–she can change that:

What will be a failure is if nobody comes and watches this network. What others will perceive as failure is if some shows don’t succeed. I’m concerned about the bigger overall picture: my belief that people are basically good and want to see the good in them reflected through their experiences and the shows that they watch. This is a gamble I’m taking. I believe that the banal state of television, the kind of insipid space that we’re in–that you can have as many channels as we have and not find anything that really interests you–means that to a great extent we’ve lost our way.

Oprah reveals she did have other options, including living a life of leisure in France:

I could see myself bicycling with my baguettes and the whole thing. But I talked it over with my friends, and they all said, ‘You’re not going to be happy doing nothing.’

And if that doesn’t work out, there’s always an Ambassadorship. Yeah, really:

“Nobody’s offered [that] to me in this administration. But I will tell you a funny story. When I was at the Kennedy Center Honors for Tina Turner [in 2005], I was sitting at Colin Powell’s table, and he said that we were in the ambassadors room [a room at the State Department with portraits of ambassadors and secretaries of state]. And I said, ‘Gee, this is really–this is lovely. An ambassador, I think that would be really great.’ He goes, ‘Name your country, baby, name your country.’ “

And in an online version that’s not part of the weekend magazine, Oprah shares her thoughts of Sarah Palin:

“I don’t know her so I can’t speak to [whether or not she’ll be a candidate]. But I would say that America’s going to fall in love with her from [her reality series, Sarah Palin’s Alaska]. When I saw that first episode, I went, ‘Whoa! She is charming and very likable.'”