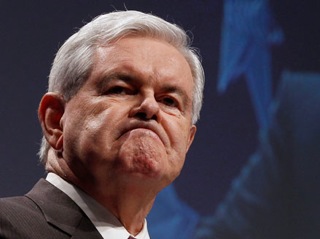 Who would’ve thought it was going to be Peggy Noonan who would coin the single most hilarious, funny-because-it’s-true nickname for what candidate Newt Gingrich has become in the sunset of the complimentary Republican primary surge every candidate (except Jon Huntsman) appears to be entitled to? Noonan’s campaign roundup in today’s Wall Street Journal takes a brutal look at all the candidates’ flaws– Mitt Romney‘s bland inevitability, Gingrich’s muffinness, Rick Perry‘s assumed privilege– and goes, somewhat surprisingly, softest on Rick Santorum.

“Mitt Romney’s victory in Iowa is underappreciated,” begins Noonan’s article, which goes on to describe the Republican Party as a conglomerate of three increasingly hostile factions: libertarians, social conservatives, and the moderate establishment types that support Romney. In that sense, Noonan seems to agree with Rachel Maddow that Santorum and Rep. Ron Paul have the ability to cancel each other out, to Romney’s favor. But unlike Maddow’s analysis, Noonan takes far more into consideration two other candidates: Newt Gingrich and Rick Perry.

Of the former, she notes that he is one of many delivering to Romney “a beating.” She does not mention Gingrich’s chances on their own but notes his attacks on Romney as his signature power in the Republican field, compiled with attacks from other candidates::

Right now Mr. Romney’s taking a beating. He’s everyone’s target, and in a way that speaks of something beyond the usual campaign ferocity. There’s something else going on, a taunting: “If you’re so inevitable how come I’m not afraid of you?” Newt Gingrich, angry little attack muffin, called Mr. Romney a liar. A Santorum fund-raising letter this week called Mr. Romney a “bland and boring career politician.” A radio ad for Mr. Paul: Nominating Romney is “a recipe for defeat.” Newt, in an interview: “He’s not truthful.”

Noonan then turns to the Perry campaign, and effectively dismisses it for one of the more eccentric reasons anyone else has: not because he botched many debate appearances or because there was no air this time around for so many religious social conservative in the race, but because he is simply too good at this political thing. “But maybe he’s not seeing that every few cycles the political gods choose someone who’s got everything—attractive, lots of money, a big state, a machine of sorts, or at least a bunch of operatives and hangers-on—and embarrass him. Just for fun,” she warns, “Because it pleases them… Do not fight the gods! The gods are fickle! They change their minds! But only later.”

She goes on to define Rick Santorum’s strength as “most especially a deep identification with and caring for the working class,” and does not seem to mind his reliosity as a facet of his campaign for the purposes of winning the primary. But Noonan does have serious reservations about Santorum– namely, his foreign policy, calling it “all George W. Bush and no George H.W. Bush,” something New Hampshire won’t go crazy for. Might not sound complimentary, but at least Noonan doesn’t think the gods are against him.