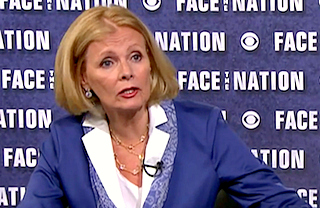 The always affable “Boom Boom Boom” Peggy Noonan wrote about her Domincan friend Cesar in her Wall Street Journal column on Friday, because he’s not white but he (and his fellows) support Donald Trump.

Gawker reports that Noonan, whose column is titled “America Is So in Play,” like totally gets why Trump’s continued popularity in the polls “reflects a change in the electorate only now coming into focus.” Is it numbers? Demographics? Demagogues?

The latter is definitely a part of the mix, but Noonan is more interested in what her good-best-wonderful-we-might-get-married friend Cesar has to say. He’s Dominican (did I already say that?), works in a shop, listens to Spanish-language talk radio, and totally knows why his fellow Spanish-speaking peoples support of Trump — quantitative analysis to the contrary:

My friend Cesar works the deli counter at my neighborhood grocery store. He is Dominican, an immigrant, early 50s, and listens most mornings to a local Hispanic radio station, La Mega, on 97.9 FM. Their morning show is the popular “El Vacilón de la Mañana,” and after the first GOP debate, Cesar told me, they opened the lines to call-ins, asking listeners (mostly Puerto Rican, Dominican, Mexican) for their impressions. More than half called in to say they were for Mr. Trump. Their praise, Cesar told me a few weeks ago, dumbfounded the hosts. I later spoke to one of them, who identified himself as D.J. New Era. He backed Cesar’s story. “We were very surprised,” at the Trump support, he said. Why? “It’s a Latin-based market!”

That seems like a very sound argument. I look forward to the next column, in which Noonan interviews the Korean server at her local Thai restaurant for thoughts on Trump’s inspiring defense of Asians against Jeb Bush.