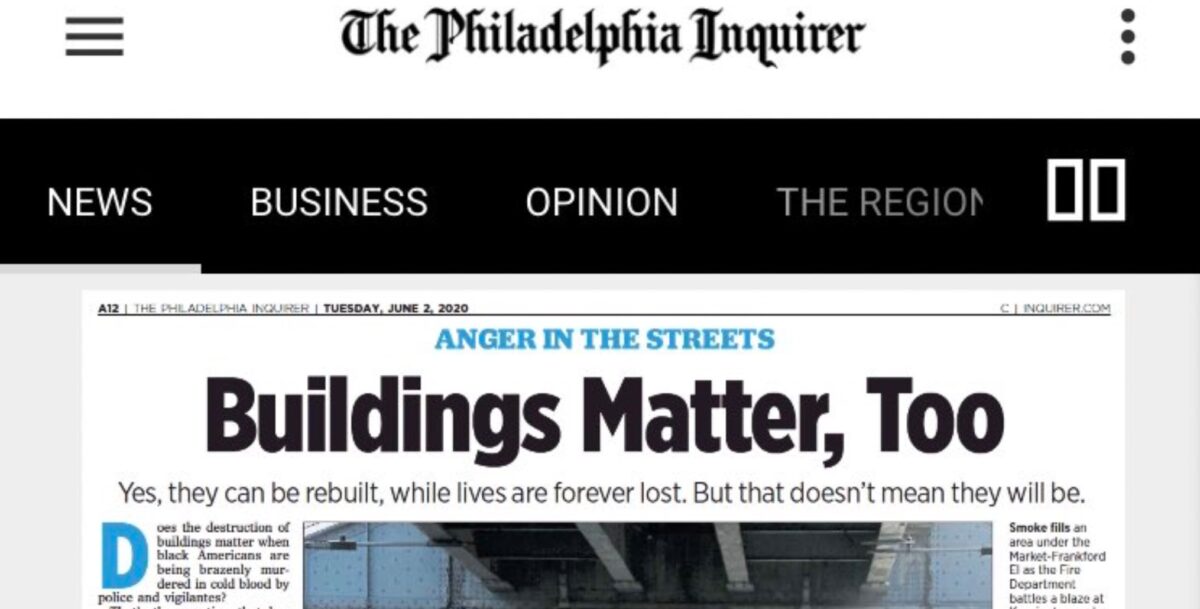 The Philadelphia Inquirer issued an apology on Wednesday after running a headline that drew intense criticism amid the calls for racial justice over George Floyd’s death.

The newspaper published a column on Tuesday entitled “Buildings Matter, Too,” a spin-off from the phrase “Black Lives Matter.” The article lamented that Philadelphia’s buildings and architecture have been damaged in the riots that coincided with peaceful protests over Floyd’s death. While it acknowledged that “Black people have been the victims of systemic oppression in America for 400 years” and Floyd’s death was a “grotesque” affront to the country’s principles, the piece largely remained focused on the nationwide property damage over the last two weeks and how it detracts from efforts to protest racism.

“You can be appalled and heartbroken by our country’s deadly racism, and yet still quake at what the damage to downtown portends for Philadelphia,” the piece concludes. “Racism is built on strong foundations. The momentary satisfaction of destroying a few buildings does nothing to remove those structures. All it does is weaken our city.”

Following the column’s publication, Huffington Post reported that dozens of Inquirer staffers signed a letter accusing the headline of minimizing injustice by equating racism with property damage. The staffers also said that beyond the headline, they are taking issue with the paper’s past leadership.

In light of this outrage, the Inquirer’s editors apologized by saying the “Buildings Matter, Too” headline was “deeply offensive. We should not have printed it.” They also acknowledged their staff’s complaints, saying “We hear you and will continue to listen as we work to improve.”

The headline offensively riffed on the Black Lives Matter movement, and suggested an equivalence between the loss of buildings and the lives of black Americans. That is unacceptable. While no such comparison was intended, intent is ultimately irrelevant. An editor’s attempt to capture a columnist’s nuanced argument in a few words went horribly wrong, and the resulting hurt and anger are plain…This incident makes clear that changes are needed, and we are committing to start immediately.