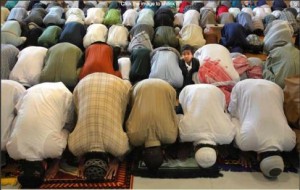 Apparently, on top of it being incredibly ‘insensitive’ for Muslims to build a mosque near Ground Zero it’s also now insensitive to show signs that Muslims (practitioners of the second largest religion in the world) exist on September 11th. That’s what the Portland Press Herald learned when they had the audacity to publish a story about the end of Ramadan on their front page that included a terrifying picture of Muslims praying. Soon, many of their readers complained and editor Richard L. Connor quickly published a letter apologizing for sullying his pages with such insensitive trash.

Here is the full text of Connor’s apology which followed the printing of this story (which was ironically entitled “A show of faith and forgiveness”):

“A note of apology to readers
We made a news decision on Friday that offended many readers and we sincerely apologize for it.

Many saw Saturday’s front-page story and photo regarding the local observance of the end of Ramadan as offensive, particularly on the day, September 11, when our nation and the world were paying tribute to those who died in the 9/11 terrorist attacks nine years ago.

We have acknowledged that we erred by at least not offering balance to the story and its prominent position on the front page.

What you are reading today was the planned coverage of the 9/11 events. We believed that the day after the anniversary would be the appropriate occasion to provide extensive new coverage of the events and observances conducted locally and elsewhere.

In hindsight, it is clear that we should have handled this differently and with greater sensitivity toward the painful memories stirred by the anniversary of 9/11.

Earlier this week, I welcomed a former colleague back into the news business.He retired at a young age after successful stints as a reporter,editor, and then publisher of one of the country’s largest newspapers.

I told him he was about to witness a new world in media, a world where 24/7 is not a cliché but a way of life for us. We literally work around the clock in order to contend with the speed of communication.

On Saturday morning, he witnessed what I was talking about.

Readers began writing to me and to our paper and website en masse, criticizing our decision on coverage and story play of the local observance of the end of Ramadan by local Muslims.

We began answering them immediately and directly by e-mail and we posted responses on Facebook, Twitter, and on our website. A good eight hours into the day, our editors were still working from home to keep up with a necessary response to our customers. Some managers came to the office on what was supposed to be a day off.

I expect no accolades for what I see as our prompt and courteous responses. Working fast, with immediacy and with concern for fairness, is just part of our reality these days.

Here is one of the responses I sent, which I believe covers a lot of ground:

‘We are sorry you are offended by today’s front page photo and story and certainly understand your point of view. Many feel the same way. We do not offer the stock excuses you cite. We should have balanced this story with one that showed our sensitivity to today’s historic importance. You will see tomorrow that our planned coverage of today’s 9/11 events is extensive, far more so than the coverage of this event on Friday. We apologize for what may appear to be our insensitivity to the historic significance of this day. Tomorrow’s newspaper will feature extensive coverage of the commemoration of today’s events.

‘Our editors believed that 3,000 persons marking the passage of a religious observance and congregating in Portland to do so was news.I believe that decision was correct but I also believe we should have handled it in a more sensitive way.’

Twice each day, a group of highly experienced editors convene to make news decisions on story coverage and story play. I do not attend those meetings but I take responsibility for their decisions. I trust the editors who make the decisions because I know how much they care about our communities and about being fair. They try hard and most days they succeed.

As experienced and as concerned as they might be, however, they are also human. They make mistakes. They also are free to voice opinions, and some of them may disagree with my stance on this issue. That’s OK. We believe in free-flowing dialogue and openness.

We have had that same dialogue and openness with our readers over the past 24 hours. Virtually all those we have heard from have been outraged over our decision on news play in Saturday’s paper. Most have also been courteous and polite.

Again, if you were offended, I apologize.

To those of you who took the time to write or Tweet, or go to Facebook, thank for letting us know your opinions and how much you care.

Not surprisingly, this apology has earned its own outrage. As the USA Today noted, one of the people angry was Justin Ellis, a former columnist for the Press Herald, who had this to say on his personal blog:

“Unfortunately what Connor’s done is created a self-inflicted wound to his newspaper. By apologizing for a factual story portraying part of the community it covers, the Press Herald has damaged its ability to educate, betrayed the journalists who work there, alienated a part of their audience and shown that editorial control can be won by the power of the mob.

In offering the apology, Connor was taking a reactionary stance to an outcry from readers, over email, phone calls, Facebook and Twitter. Since I’ve never sat in the big seat reserved for publishers, this may be guesswork, but taking flak for (and defending) stories is part of the job. As he outlines in his letter, the work of assigning, editing and placing stories is a serious one that involves a large group of people, all of whom just got thrown under the bus in favor of the commenting class.”

(By the way, that photo above is the super horrifying one that the Press Herald printed on 9/11. What’s that little kid looking at? So sinister.)