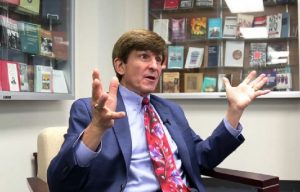 For those bemoaning Donald Trump’s shocking election victory over Hillary Clinton, there might be a bright spot for you to look forward to.

One of the few prognosticators to accurately predict Trump winning on Election day was Allan Lichtman, a professor at American University who used a system based on 13 different historical keys to predict presidential races. He has now correctly called each election since 1984.

In conversations with the Washington Post in the weeks prior to Election Day, Lichtman highlighted that there were certain factors that made it apparent that Trump would win a close election.

During one of those discussions, he noted that while Trump would emerge victorious, he would also find himself impeached. Why? Because a Republican Congress would prefer his running mate to him.

“I’m going to make another prediction,” he said. “This one is not based on a system, it’s just my gut. They don’t want Trump as president, because they can’t control him. He’s unpredictable. They’d love to have Pence — an absolutely down the line, conservative, controllable Republican. And I’m quite certain Trump will give someone grounds for impeachment, either by doing something that endangers national security or because it helps his pocketbook.”

Post-election, he noted that poll predictors, like Nate Silver, are nothing more than clerks and there is not scientific analysis in anything that they’re doing. He also pointed out that blamed shouldn’t be placed on Clinton or her campaign because their were other factors at play that made it difficult for her to win.

“The Democrats cannot rebuild by pointing fingers at Hillary Clinton and her campaign, which as the Keys demonstrated, were not the root cause of her defeat,” he said. “The Democrats can rehabilitate themselves only by offering an inspiring progressive alternative to Republican policies and building a grass-roots movement.”