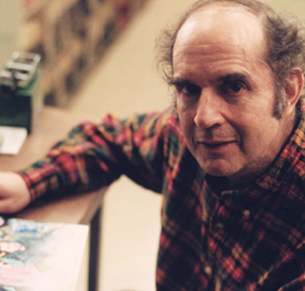 An hour ago I received an email from artist Molly Crabapple. “Just heard about Harvey. I’m so so sorry Malice. Damn.” Tense, I checked the Wikipedia to find out that my mentor, my biographer and my friend Harvey Pekar had passed away. “Just found out on Twitter of all things,” Molly let me know.

Twitter, email and Wikipedia were things that were not exactly Harvey’s purview. R. Crumb’s cover of Best of American Splendor famously has Harvey cursing at the monitor, frustrating that he can’t learn to work a [bleeping] computer. His movie’s tagline, “ordinary life is pretty complex stuff”, was a bit of a double entendre because everyday things frustrated Harvey. Whenever we tried to take an elevator to the 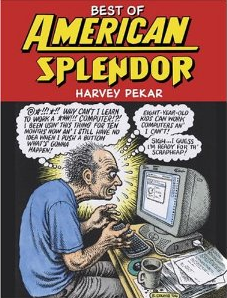 lobby, he always pressed the lower lefthand symbol on the elevator panel. In one case, this meant the icon for “door open”—because back home that was where the lobby button was located. Another time I asked him to send me signed bookplates, so I could go around town and “autograph” our book Ego & Hubris: the Michael Malice Story. “I found some stickers at the store,” he told me, in that trademark raspy voice that I can hear even now. Days later came—an envelope of autographed Post-It notes.

There was no man more aware of his weaknesses than Harvey Pekar. His sense of frustration at his own frailties was palpable, and informed much of the comic book series he wrote for decades. “I’m real fucked up, man,” he told me, within 5 minutes of us meeting.

It was in 2003 when I first got together with Harvey. My friend John Kuramoto, who did the animation for the film, let me know that he had received an email from the film’s producer Ted Hope. “Harvey’s in town with nothing to do,” Ted had emailed to everyone who had worked on the film. “If you want to hang out with him, now’s your chance.”

Amazingly, I was the only one who took Ted up on that offer. 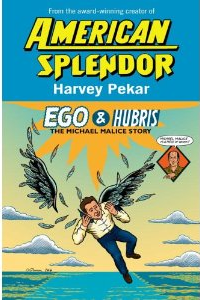 Only having seen the film, I girded myself for a meeting with the notorious “curmudgeon”—a term Harvey absolutely despised. (“It makes me sound like Andy Rooney!”). I tried my best to find an outlet I could interview him for, to help promote his film. “If it’s OK with you,” Harvey suggested instead, “I’d rather just sit and talk.”

Harvey wasn’t being rhetorical. He was violently uninterested in status and stature; it was never Harvey Pekar, legend. No matter who he was with, it was simply two people having a conversation. The exceptions were when fans expected him to complain about things. Then Harvey knew to play to the crowd and go negative, with a twinkle in his eye. “I’m basically a ham,” he admitted to me more than once.

I met him because Harvey was glad to have someone to talk to while in New York. Without his wife, Joyce Brabner, he was all but lost. Joyce was the one who took care of him and protected him, including nursing back from cancer on more than one occasion. From the outside theirs was very much a Baby Jane/Blanche Hudson relationship, with her negative energy being downright pathological. Hope Davis, who played her in the film, had to have her banned from the set. “I can feel her eyes boring into me,” Davis said.

When I myself went to Cleveland last year to celebrate his birthday, there was a moment where Harvey was sitting alone in a corner. I crouched down and spoke with him—about politics, about how terrible people were, about life in general. Minutes later, Joyce came over. “What is he, your lapdog?” she snarled. 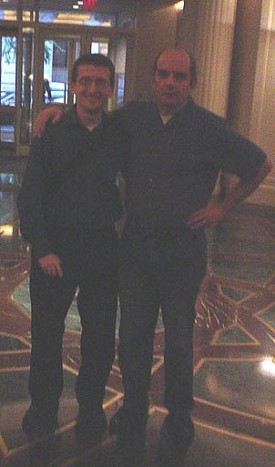 I bit my tongue until she left. “What did I do wrong?” I asked him. “I’m just trying to keep you company.”

“You think after all these years I know why my wife says any of the things she says?” he said, with a roll of his eyes.

But despite the darkness he was so famous for, there was increasing splendor towards the end of Harvey’s life. Continuing his autobiographical series for DC Comics’ Vertigo imprint, he also found a new life as a comic book historian, penning graphic novels about SDS and the Beats. Despite constantly having to “hustle”, as he put it, Harvey finally achieved his goal of being an in-demand writer. “A lot of good that’ll do if we’re in a worldwide depression,” he moaned.

“Wow, Harvey,” I told him. “You’re really reaching, if the only thing you have to complain about is the world economy.”

Despite himself, Harvey Pekar laughed. After decades in the wilderness, even he couldn’t deny that life was finally good. Mr. Doom-and-Gloom had gotten his happy ending after all.

Photo of Harvey Pekar, top, via The Agency Group. Photo of Pekar and Michael Malice courtesy of Michael Malice. Note: The headline has been corrected since publication; it originally said “Cartoonist,” but Pekar did not actually draw himself.