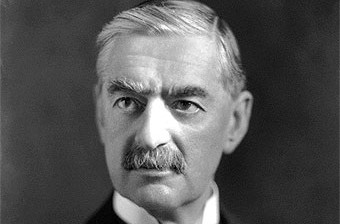 Editor’s Note: While sifting through a musty pile of newspapers bequeathed to us by the late Dame Helga Rutledge-Sudley, formerly of Staithes-upon-the-Wode, Mediaite recently discovered a long-lost article from the 1939 UK periodical The Daily Rapscallion. Although it bears little resemblance or relevance to the issues of today, we thought it might interest history buffs, and reproduce here in full.

Reports from inside 10 Downing Street indicate that Prime Minister Neville Chamberlain is “apoplectic” that Germany has begun an invasion of Poland.

Chamberlain is reportedly floored by the news. While Adolf Hitler had often spoken publicly about his desire to invade Poland and the need for lebensraum, behind the scenes Chamberlain was assuaged by the German leader’s promise to moderate his foreign excursions. Hitler had no intention of sticking to the dangerous rhetoric that drove his rise in German politics, Chamberlain assured the public.

“We expect him to pivot to a policy of pacificity soon,” he promised shortly after the conclusion of Munich Agreement. “Certainly we expected him pivot after the anschluss and remilitarization of the Rhineland. But this time it will happen.”

Reports of the invasion are largely seen as a vindication of the “Never Appease” wing of the Conservative Party, led by Winston Churchill, Benjamin Sasseford-Butley, Earl of Lincoln, and Lord John Ellis. Chamberlain had long battled with the dissident Tories, citing the need for party unity and to “defeat the bolshies” when next His Majesty dissolves parliament. Churchill countered that Germany could not be reasonably expected to stop a strategy that had brought it nothing but success so far, and noted Hitler was “a one-balled, two-faced wanker.”

Still, some in Britain maintain that standing by Germany is the better option when compared to other equally unsavory allies. At least one Staithes-upon-the-Wode resident was heard in The Drunken Page yesterday bellowing about a recent scandal in which U.S. President Franklin Delano Roosevelt was found stashing confidential telegrams in a water closet in Hyde Park. When pressed on their support for the Nazi regime, said gentleman accused this reporter of partaking in cuckoldry.

Even Chamberlain seems to glimpse a glimmer of hope. Carl Jonathan, correspondent for the Good Morning Gov’na radio programme, reports this morning that the government “clearly think it’s a possibility” that Hitler could be replaced. All their plan requires is for the power-hungry megalomaniac to willingly step down.

Others in the Chamberlain government are also still trying their hardest. The BBC reports that veteran Tories plan to “stage an intervention” with Hitler, explaining where he has gone wrong and how he can save face. “I have no doubt that after ignoring our pleas and advice for years, this time he will truly listen,” said one such Conservative, whose father Hitler had previously accused of assassinating the Archduke Franz Ferdinand.

One bright side, Chamberlain aides note, is that Hitler’s promises to oversee massive ethnic cleansing and carry out war crimes are surely nothing but empty rhetoric.